Made a recent trip to Mr. Kay's Books. Found three Jane Langton's I have been looking for! I took a bag of my read books in for trade. They took about half of them. They are very choosy. 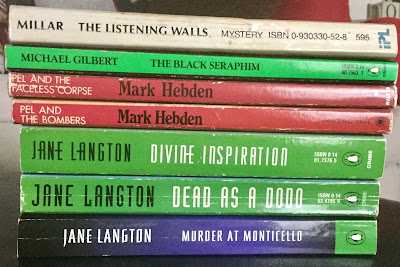 I've never heard of Mark Hebden before. These books are part of a series, Inspector Evariste Clovis Désiré Pel, a quirky French detective. France is not particularly a setting I seek out, but the books are lovely copies and they intrigue me. They aren't really old, 1979 and 1982. They are Walker British Mysteries. It looks like his daughter continued the series after his death. Have you heard of or read any Hebden? What did you think? Michael Gilbert is a new author for me too.

I got three books a while ago at a Goodwill store. 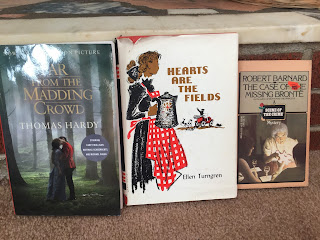 I was pleased with the Ellen Turngren book. I've not heard of her, but it's set in a farming community in Minnesota and I like that setting! It was written in 1961. She appears to have written three books. She is of Swedish descent and born and raised on a Minnesota farm. On the book jacket it says 'The story is told against a background of farming life so vividly portrayed in its sewing circles, church socials, gossip and county fairs that the reader can almost taste the goodness of it." Sounds delicious! Can't wait to read it and tell you all about it and Ms. Turngren.

Email ThisBlogThis!Share to TwitterShare to FacebookShare to Pinterest
Labels: New on my shelf