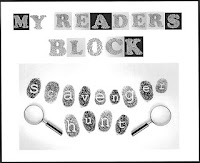 I had a lot of fun getting back into my favorite genre, vintage mysteries, this year, thanks to Bev @ My Reader's Block. I signed up for both the silver and the gold eras. If your not familiar with this challenge, we had to hunt for objects on the covers of our books.  Here's how I faired...

I hope I got all of these linked up on the review posts over the year! I am so scatter-brained! Looking forward to next year!

Posted by Peggy Arthurs at 1:10 PM