I'm sure you have all heard something of the fires that have ravaged the Great Smoky Mountain National Park (which is 100 years old this year!) and the town of Gatlinburg at the base of the park. We live an hour from there. I've been glued to the local TV as they have broadcast 24 hrs. for a couple days. It is horrific, its the only word I can think of to describe the scene. Gatlinburg looks like a war zone.

The fire started on Wednesday evening, the 23rd, by human hand (under investigation), in the Chimney Tops area of the park.

Monday a cold front moved in and brought with it low humidity and gale force wind gusts (87mph). The fire moved rapidly and the winds brought down trees and power lines which when laying on the dry drought ridden leaf cover, ignited new fires. Within an hours time we had a major event, apocalyptic even! I've never seen anything like it. 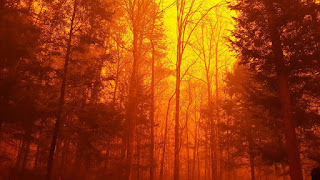 The fire quickly made its way down to Gatlinburg, the popular tourist town at the foot of the park. 4,000 people live and work in Gatlinburg. Imagine this, night, winds raging, fire moving at breakneck speed, trees and power lines across the winding mountain roads making escape impossible in some situations. It's unimaginable! 14,000 were evacuated from Gatlinburg and Pigeon Forge. 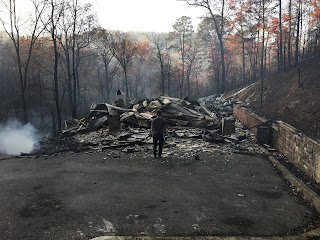 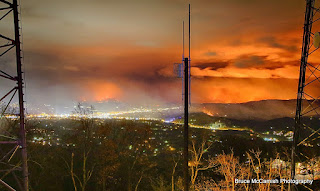 Many homes burned to the foundation, nothing left standing, in Gatlinburg and surrounding communities. We've heard stories of family members calling loved ones frantically, that the fire was around the house and now the family can't get ahold of them and have no idea if they survived. Fires are still burning even after rain. No one is allowed in yet to their homes. Seven confirmed deaths, 74 injured as of the last update. So many missing. They have 4 search zones they are combing through. There are so many remote homes in the mountains too! In the last update the fire chief said finding the missing is not an easy job as the fires burned so hot there is nothing to find, basically and it will be a forensic search soon, in other words digging for bones. I told you it is horrific!

As of last update just a half hour ago 17,108 acres have burned. 10,000+ in the National Park and 6,000+ in the surrounding area. The fire chief said even though we had a day of good rain it was not enough to penetrate our drought ridden ground and the fires can rekindle easily. There are a couple new ones today. Low humidity and wind today is a real danger. 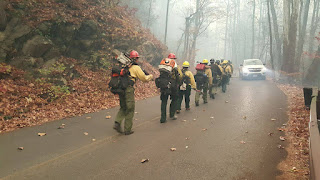 So much need now in the area, so many families lost everything. 700 structures destroyed, homes and businesses. The mayor of Gatlinburg lost his home and business. Firefighters battling the blaze while wondering if their families were safe and if their houses still stood.  There is a 'Smokies Strong' T-shirt for sale and the proceeds go to support victims of the fire. You can order one here, but be warned, the site keeps crashing as the response has been fantastic!

WBIR TV in Knoxville is the station that I have been keeping up with. You can check out videos and This link takes you to a page with a video of a short ride a long with a firefighter as he drives through it. Click on Home on the page to see the latest.
updates and there's even a link at the top to watch live coverage if you'd like.

Here are a few pics of the devastation... 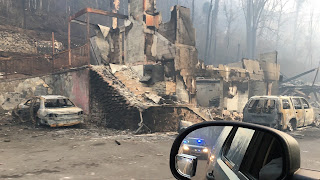 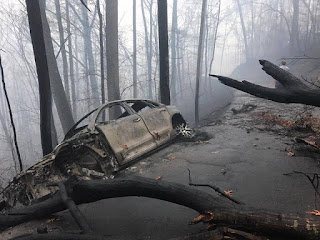 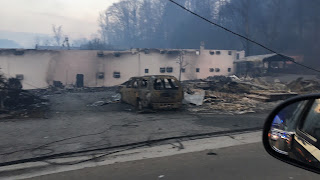 So much wildlife lost too! We need your prays and support. When we rebuild come visit and support the businesses and see our beautiful mountains.

With a heavy heart,
Peggy Ann