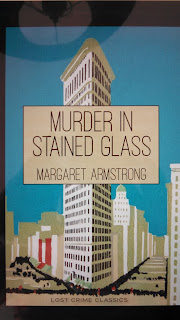 Meet Miss Trumbull, a stout talkative New Yorker with perfect manners and a passion for sleuthing.When the remains of temperamental artist, Frederick Ullathorne, are found in his own fiery kiln it looks like a ghastly murder has been committed. But with only a few bones as evidence the local police are getting nowhere fast. Can Miss Trumbull pick up the clues that the police are missing? Or will her interfering get her into trouble in more ways that one?
"Fast paced and a lot of fun"If you like Agatha Christie then you'll love Miss Trumbull."This delightful whodunnit by Margaret Armstrong was first published in 1939. It is the first in the American Queens of Crime series from Lost Crime Classics

Bones were found in a kiln. Burned so hot that the bones were almost dust and very fragile. So the clue that told them who the body was is a little far fetched.

"Your Honor, I have just received a report on th shred of cloth and the two trouser buttons found in the kiln. The New York police inform me that L P Fortune, the tailor, made a suit of this sort of cloth, a Canadian homespun, for ******** about two years ago. It is of a peculiar weave and color, imported especially for ********."
How could a piece of fabric survive the fire?

Aside from that Miss Trumbull grew on me and if I came across another in the series I would pick it up.