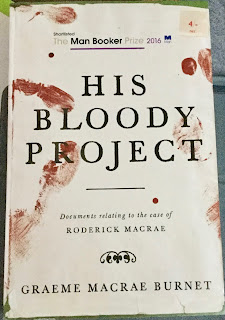 back cover:
The year is 1869. A brutal triple murder in a remote community in the Scottish Highlands leads to the arrest of a young man by the name of Roderick Macrae.

A memoir written by the accused makes it clear that he is guilty, but it falls to the country's finest legal and psychiatric minds to uncover what drove him to commit such merciless acts of violence.

Was he mad? Only the persuasive powers of his advocate stand between Macrae and the gallows.

Graeme Macrae Burnet tells an irresistible and original story about the provisional nature of truth, even when the facts seem clear. His Bloody Project is a mesmerizing literary thriller set in an unforgiving landscape where the exercise of poser is arbitrary.

This book is brilliant! It was shortlisted for the Man Booker Prize this year, although sadly it lost. It's very hard to wrap your head around the fact that it is a work of fiction and not true crime. Your taken back to the Highlands during a very desperate time. Life was harsh, and this poor family was just unbelievably unlucky. The court scenes are riveting. This is one that you'll think on for days after you finish it.

I am writing this at the behest of my advocate, Mr. Andrew Sinclair, who since my incarceration here in Inverness has treated me with a degree of civility I in no way deserve. My life has been short and of little consequence, and I have no wish to absolve myself of responsibility for the deeds which I have lately committed. It is thus for no other reason than to repay my advocate's kindness towards me that I commit these words to paper.

So begins the memoir of Roderick Macrae, a seventeen-year-old crofter, indicted on the charge of three brutal murders carried out in his native village of Culduie in Ross-shire on the morning of the 10th of August 1869.
It is not my intention to unduly detain the reader, but a few prefatory remarks may provide a little context to the material collected here. Those readers who prefer to proceed directly to the documents themselves are of course free to do so.
In the spring of 2014, I embarked on a project to find out a little about my grandfather, Donald 'Tramp' Macrae, who was born in 1890 in Applecross, two or three miles north of Culduie. It was in the course of my research at the Highland Archive Centre in Inverness that I came across some newspaper clippings describing the trial of Roderick Macrae, and with the assistance of Anne O'Hanlon, the archivist there, discovered the manuscript which comprises the largest part of this volume...

You NEED to read this book!

This makes 21 books for the Read Scotland Challenge this year so I've made my commitment! Now how many over can go in 2 months?