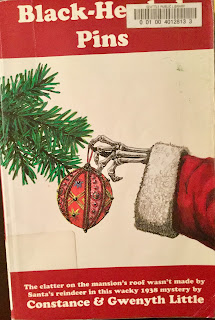 Why wouldn't the corpses stay put at this Christmas houseparty?

With her bank account down to empty, orphaned Leigh Smith has no choice but to take a job as a paid companion and housekeeper to the miserly Mrs. Ballister. However, once she moves into the drafty, creaking old Ballister mansion in the wilds of New Jersey, Smithy has reason to regret her decision.
But when Mrs. Ballister decides to invite her nieces and nephews for Christmas, Smithy sees the possibility for some fun. What she doesn't expect is to encounter the Ballister family curse. It seems that when a dragging noise is heard in the attic it foretells the death of a Ballister. And once a Ballister dies, if you don't watch the body until it's buried, it's likely to walk.
The stocking are barely hung from the mantle when those dreaded sounds are heard in the attic, and before long, corpses are going for regular midnight strolls. Smithy and a pair of potential beaux turn detective and try to figure out why the murderer leaves black-headed pins at the scene of every crime.
Filled with the eccentric characters and odd plot twists typical of a Little mystery, The Black-Headed Pins first appeared in 1938 and was the second book by the two queens of the wacky cozy.

At first I thought this was going to be a little bit of a boring read and I didn't care for any of the characters. Having enjoyed another Littles book, The Black House I decided to keep reading and I ended up really enjoying this wacky mystery and liking the heroine very much! I think I would like to collect all their books!