Death and the Pleasant Voices by Mary Fitt 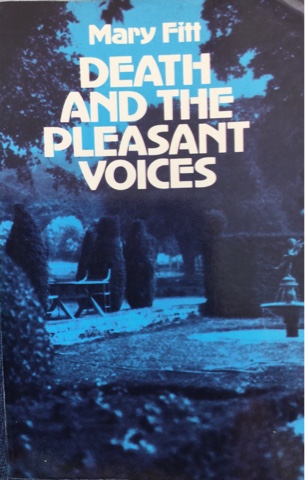 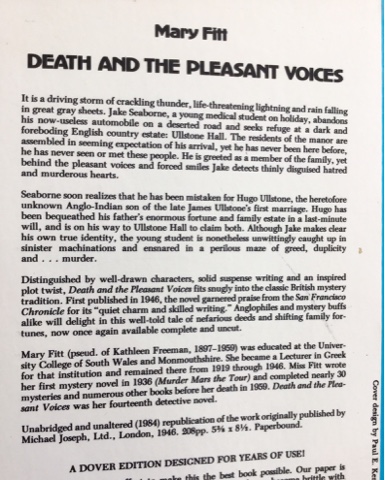 I'm lazy today, so I just took a picture of the back of the book for you to read.

I really enjoyed this book. She wrote nearly 30 mysteries and I see it is going to be very hard to get my hands on others. This title seems to be the one that is easily accessible. If you love vintage fiction then you definitely need to get your hands on this one! I hope someone reprints her other books!

Or your reading pleasure, the opening of the book...
I have never seen such lightning or such rain and all my life. As I drove, the wind swept towards me and great gray sheets, so that the macadamed road was a wash, and the lightning danced in quivering perpendicular lines just ahead of me. I cowered behind my low wind screen as if to avoid a blow; and over the sound of the engine I could hear crash after crash of almost continuous thunder. The sky  behind, before, above, closed down over me; was far darker than the surface of the road. Unable to think, and scarcely able to see, I steered a long, doggedly and slowly, wondering what it would feel like when the inevitable happened and the car was struck: is there, or is there not, a moment of awareness before death and oblivion, even when the manner of death is so complacently said to be instantaneous? I wonder then, and I wonder now.

I came to a fork, and took the right-hand road. There was no means of knowing which was the correct one; the only thing to do was to go on. I had not gone more than a mile when I realized that I must've chosen the wrong way: this was no longer the macadamed surface of the main road - itself a very third class road with an enormous camber at each side, such as they still have in the country, where carts come before cars, and drainage before safety – this was a lane, with a fairly good but untarred surface, one of those delightful lanes which are the same red color as the plowed fields behind their hedgerows. There was no room to turn; there was a ditch and a steep bank on either side, and the ditches, like the lane, were running with water. One could do nothing but press on in the hope of coming to a gap or gateway, or perhaps a house or farm where one could take shelter. I pressed on, therefore; and I was not made happier to find that I was now coming into an avenue of immensely tall elm trees. I knew all about the dangers of elm trees in the storm. The dark green tunnel swallowed me up; it seemed to shut out some of the lightning, though the thunder still crashed unrelentingly overhead. And then, with a sputter and a sigh, my engine died.

I got out. It was useless to attempt repairs, useless to open the bonnet even, while the rain stream down, making bad worse. I pulled up the collar of my storm coat, and bowing forward, began to walk on along the lane; the elms groaned and creaked and soughed. The lush dark green grass and the hedgerows was uncut and thick with chervil, and the ditches ran gurgling like mountain streams. I could not believe that this lane lead anywhere; and certainly there was no hope that any other motorist would pass this way and rescue me. Yet for some reason, or none, I did not think of turning back. I went on, as one does sometimes, sure that was the right thing to do, though I could not have said why. I was not altogether surprised, therefore, when I came to a wide opening: a curved gravel space leading to a gateway, two tall moss grown pillars with animals on the top – monkeys, I saw they were, at a second glance, and thought what a curious choice – and, wide open, but to have a most exquisitely wrought iron gates, all tendrils and vine leaves and bunches of grapes, with a touch of rather faded gilding here and there. The gateway was set sideways, not parallel to the lane, so that one saw the open halves of the gate against the background of green shrubbery. There was no launch; but the drive curved around invitingly, between rhododendrons and pines. Again, without hesitating or even making a conscious decision, I went forward as though the gates have been open for me. In fact, I realize later to my amazement, I did behave and feel exactly as if I had been expected.

When I came to the end of the drive, though, and the long mansion stood before me, I thought at first that it looked deserted.  Certainly in these times it could not be wholly inhabited. It was not beautiful, or handsome, or even very old; but it was imposing. It was built of some dark gray stone, and no imagination had been wasted on its design. It was simply a massive oblong structure with four tiers of windows, those on the ground floor being the longest and most ornamented, and those of the top the shortest; round the roof ran a stone balustrade. But there was no sign of life: no chimney smoke, and many of the windows Had their white blinds drawn, giving the whole place an eyeless look. Standing there on the broad terrace, I thought the place looked forbidding and forlorn, but, on second thought, not deserted: the lawns below the terrace were beautifully kept, the hedges were trimmed, the gravel of the drive was clean and weedless. And anyhow, I could not go back. Again I bowed forward and pushed on, around the side of the great house, passed a group of massive cypresses, to the front entrance, and with some misgivings, climbed the stone steps to the pillared porch.

The brass handle of the iron bell pull was highly polished, yet when I pulled it, it hardly seem to move, and I had little hope that it would work. But in a very few moments, slow footsteps approached, the door was open, before I had time to formulate a question that would account for my presence, I found myself handing my coat to a man servant, and following him across the hall, wiping my wet hands as I went. He asked no questions, not even my name. He seem to except me, and wondering, I excepted the role.

Does it make you want to turn the page?

This book is linked to Bev's Vintage Scavenger Hunt Gold Card for Statue!

Peggy Ann
SaveSave
Posted by Peggy Arthurs at 12:00 AM