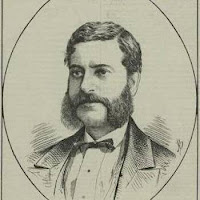 We all know the mystery writer J. Jefferson Farjeon. He wrote the recently reprinted Mystery in White among many other novels. But did you know his father, B.L. Farjeon was a prolific Victorian novelist in his day? I didn't until a couple of days ago. He wrote nearly 60 novels in his life!  I came across one on Project Gutenberg and it sent me on a search to learn more! Click on his name above to read about him. There's also a nice bit and very good picture of him over @ Jewish Online Museum, scroll down aways.

A clever tale of circumstantial evidence, showing how a twist may be given to it by a malicious purpose, and how the truth may be brought out by ingenuity and energy working in the right direction. When the evidence against Edward, "for the wilful murder of his wife, Agues Layton, on the morning of the 26th of March, by the administration of poisonous narcotic's," is brought to an end, we cannot see a loophole of escape. Yet the loophole is pro- vided in due time, and we recognise its possibility. But Edward Layton, who was willing to go to the scaffold sooner than disturb the peace of mind of the lady whom he loved, was such a lover as one does not meet every day.

But on further searching I found many of his numerous novels available for free on Internet Archive. If your interested in reading old Victorian novels this would be a place for you! I have noticed that some of them seem to feature mysteries or court scenes. We can only hope his writing is as good as his sons! Seems the whole family were talented writers!

Have you read any of his books? What did you think?