For about a week we had birds by the hundreds swarming and flocking overhead every night starting about 8:15 and when they all congregated they started filling up the neighbors maple tree. One group at a time settling on top and filtering down in. As they moved down into the tree another group would come. The noise of all the birds was amazing! I got my coffee and sat out on the porch and watched each night. The night I decided to bring my camera along to try and get shots of all of it they moved down the street to another tree! I think they are starlings, but I can't be sure. I don't see the white spotting on the body or the gold beak but they are the same size and I can't see them up close. These photos are not of the maple, but of the tree tops they loaded as they waited for everyone to arrive. 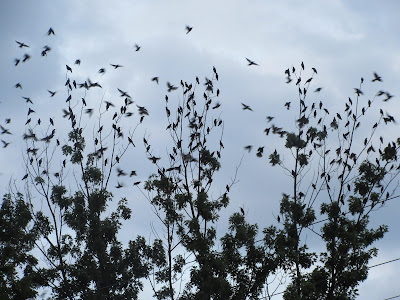 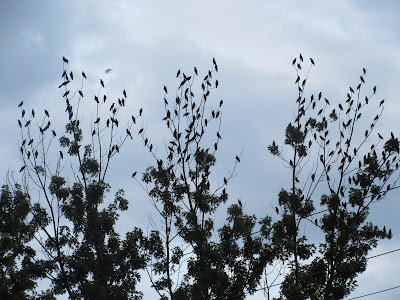 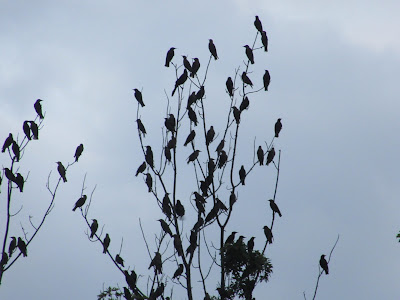 This one is a shot I finally managed to get a couple weeks ago of the Pileated woodpecker! He's on the light pole. It's heavily shadowed but you can see the shock of red on top of his head and get an idea of his size! You always know when he's in the neighborhood as he has a shriek he lets out! 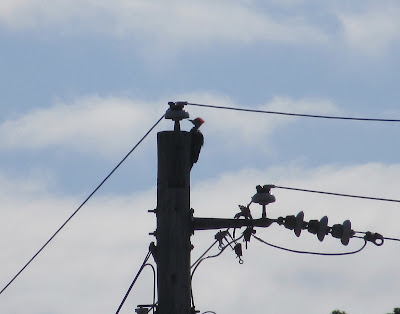 I've been noticing new birds, I couldn't quite determine what they were. They are the young starlings from early this spring finally starting to look adult! Several are from the late hatching and are just starting to get the black on the feathers (if their not starlings I don't know what they are!), but the one in the forefront is the earliest hatch and he has all the telltale feathers but hasn't gotten the gold beak yet. 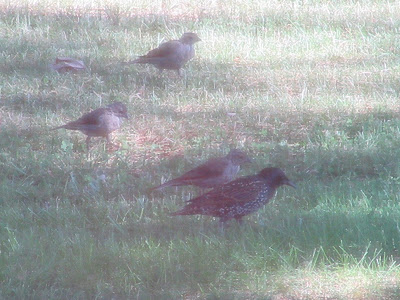 The squirrel stays off my feeders now, but he still manages to get on the suet feeders and crumbles large chunks to the ground. I suppose the birds can share. 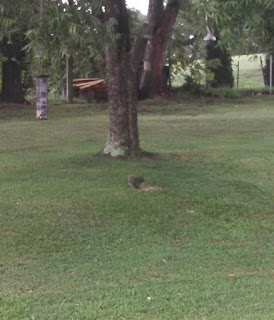