Against a Dark Sky (DCI Dani Bevan #1) by Katherine Pathak 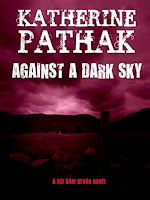 They died thirty years ago, but the case is not closed... Five walkers set out to climb Ben Lomond on a fine October day. Within hours, the weather has taken a turn for the worst. The group find themselves lost on the mountain. Two of the climbers manage to make it back down and call for help. The following day a body is found. One of the female climbers has been strangled and another man is missing without trace. DCI Dani Bevan is called to the Loch Lomond town of Ardyle to lead the case. It quickly becomes clear that Bevan must dig into the events of a similar tragedy which occurred on the hills thirty years earlier in order to find the killer. This requires the DCI to face up to the ghosts of her own tragic past, and to endeavour to put them behind her, once and for all.


Good solid mystery! Kept me flipping the pages and kept my mind engaged trying to puzzle it out. I really like DCI Bevan and her team. I'll definitely be going back for more!

I read another of Pathak's mystery series in 2014, Aoifi's Chariot (Imogen and Hugh Croft mystery #1) and really liked it as well. Click the link to read my review of it. I don't know what took me so long to get around to reading more of her books. I've had this and the second one in the Imogen and Hugh Croft series on my iPad for 2 years!