The Woman who Walked into the Sea by Mark Douglas-Home 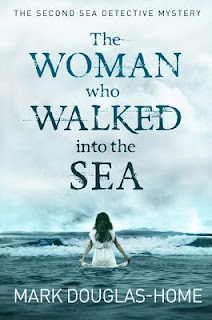 A young woman stands on a remote beach in North West Scotland, gazing out to sea. Watching her is Cal McGill, the Sea Detective, an oceanographer with a reputation for solving crimes by tracking human bodies and other sea-borne objects.

Soon Cal is helping her unravel the events of twenty-six years ago when a different woman walked across this sweep of sand and into the waves, apparently drowning herself and her unborn child.

Mary Anderson, grown old and embittered, has never revealed her memories of that terrible day; now she's prepared to make use of her knowledge.

As McGill questions the official history he's forced to confront his personal demons as well as the jealousies and tensions a divided coastal community determined to keep its secrets buried.

Once again an excellent tale from Mark Douglas-Home. I enjoyed this one just as much as his first Sea Detective Mystery, The Sea Detective. This tale is a little less gritty, no sex trafficking, and not a lot of regular detectives involved. More about long buried family secrets and a woman's search for the truth of what happened to her birth-mother. Cal's knowledge of the currents and tides convinces Violet that her mother didn't commit suicide.

Searching for the truth in a small town run by thugs and battling over the possibility of becoming a site for a large wind farm, Mrs. Anderson's need for revenge has opened a can of worms. Will it get Violet killed or will the truth finally come out? But at what cost?

Looking forward to reading the third in the series, The Malice of Waves, when it becomes available in the US!