Death at the Cut by Douglas Kiker 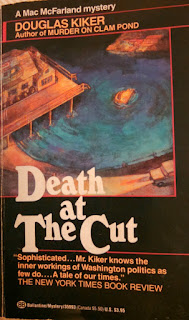 It all started with a wild canary.

For what reporter Mac McFarland had thought was a rare Spinus Tristus bird turned out to be a yellow Volkswagen, half-submerged in the water near the Cape Cod beach where presidential hopeful Dolph Bridges happened to be staying.

That might have been the end of it. But when Mac sped to the water to check it out, he found the body of a beautiful young woman still pinned in the passenger seat by her seat belt.

A tragedy, yes. But also a suspicious one. Who had been the driver? Why had the girl been abandoned? At first she appeared to be only a summertime waitress. But gradually Mac discovered that a great many important people knew her, including Senator Bridges himself, who apparently saw her as more than just a pretty face. You might say he knew her intimately in life - and maybe in death...

This is a second in a trilogy. Pretty fitting reading right now with the political aspect to the storyline! A good solid mystery in a nice setting. I like the main series characters and their interaction with each other. The plot was smoothly paced and the culprit a bit of a surprise. It was not who I was sure it was! If you come across Kiker's books pick them up, you'll enjoy them.

This book counts for Bev's Vintage Scavenger Hunt, Silver. Fulfilling the square for Body of Water on the cover. That puts me at 7 for Silver!