This, That and the Other

I haven't been around too much lately. It's just been a crazy week or so. We hired plumbers to re-plumb our house. It had old galvanized pipes from 1961 and needed venting on the kitchen sink. The shower in the bathtub sprays everywhere but down and the faucets leak. Finding parts to fit has turned into quite a challenge. The floor around the toilet was staying damp and we weren't sure where that was coming from. Bossman put a new wax ring around the toilet, two actually, as the flange was tipped crooked. Still the floor was staying wet. Maybe it was leaking through the wall of the tub from the drippy tub faucet? Big job tearing into that! No access door! So we decided to just pay a plumber and be done with it rather Bossman doing it himself.

Then the job of trying to find a plumber! Who knew how hard it would be to pay someone to do a job!! Finally found Tommie's Plumbing. Fantastic bunch of guys, knew their stuff, cleaned up after themselves and were so pleasant to have around the house!

Because the flooring around the toilet was crumbling and cracking we had to re-do the flooring first before they could do the flange. So Bossman ripped out the floor, two floors really as they put a new floor on top of the old floor. To put in the new one he had to take the old, old vanity and sink out. Now it looks like he is going to have to tear out the old white wall tile and re-do that too to accommodate the new vanity. So a simple plumbing job turned into a major remodel we didn't expect to tackle until maybe next year! But we found the leak. The supply line coming into the toilet was leaking just below the surface of the top layer of floor. In fact the pipe was almost corroded in two! Had we not done this now we could have had a real problem sooner than later! 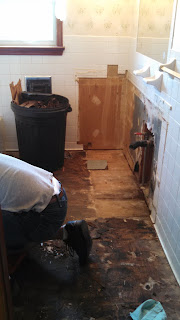 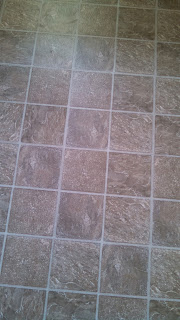 We went without a potty for four days! That was quite challenging. Thank goodness for those huge buckets! But we made it and it's amazing how fast something becomes a new habit. I still catch myself starting to basement to pee even though the toilet is up and running again! If nothing else I'm a trooper, I even let Bossman go to Myrtle Beach on a golf trip before the toilet was back in! I'll post before and after photos after its all done!

Apart from that I've been volunteering with the big library book sale coming up the end of this month. Its being held in a big warehouse and they have over 100,000 books! They've been setting up since the first of March. Books are still coming in. I go up around 3 times a week and work for 3 hrs. It's been a great way to meet people and become a part of the community. We each have a box and can put books we want in them to purchase the first day of the sale. I've also signed up to work the sale. Here's a sneak peek at the sale... 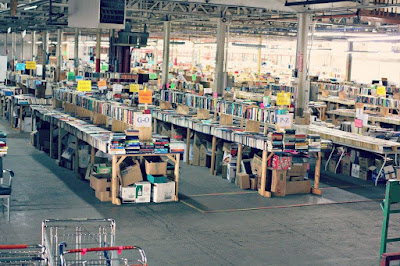 The new kitchen is scheduled to be put in the first half of May. Very excited about that! Our first visitor to our new home will be coming down May 7th and will likely find herself in the middle of the mess but she doesn't mind, she'll be my morale support! I've picked natural hickory cabinets and I'm getting stainless steel appliances. It's been fun picking everything out. I found a light fixture for over the table that looks like mason jars hanging! Can't wait to show before and after pics to you when its done. This kitchen is so outdated and dark now!

I made this really easy dish for dinner one night and it was so good!
Quick and Easy Beef Skillet.  Try it out!

I'm reading Open Wounds the new Douglas Skelton book. I'm loving it, but my reading has been slow this last week. Douglas will be stopping by The Post soon too, so watch for that! Jumping into Airs Above the Ground by Mary Stewart tonight. A gal on Goodreads and I are doing a read-a-long. If you have the book or can get it at the library jump in too!

Found the funniest page on Facebook. A Bangor Maine police officer writes the most hilarious updates. He reminds me of Mike Rowe if you know who he is. If your on Facebook check out the Bangor Maine Police Department page! The 'Got Warrants' posts are the greatest!

I found a new church! I'm new and its hard to go into an established group all by yourself. But I came across an ad in the paper for a Morristown TN church (Arrowhead Church) starting a campus here in Greeneville. I checked out their website and it looks like an excellent fit for me so I jumped on the chance to go to the very first service. We were all new! Check out the home webpage, you can see part of me sitting next to the girl that is laughing with the man next to her! I have on a black and tan striped sweater.

Thanks for stopping by and sittin' awhile with me!
Peggy Ann