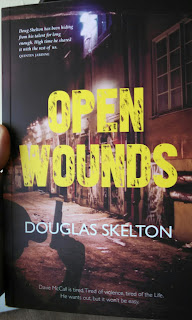 Davie McCall is tired. Tired of violence, tired of the Life. He's always managed to stay detached from the brutal nature of his line of work, but recently he has caught himself enjoying it.

In the final installment in the Davie McCall series old friends clash and long buried secrets are unearthed as McCall investigates a brutal five-year-old crime.

Davie wants out, but the underbelly of Glasgow is all he has ever known. Will what he learns about his old ally Big Rab McClymont be enough to get him out of the Life? And could the mysterious woman who just moved in upstairs be just what he needs?

This is the final installment in the Davie McCall series and sadly I started with it. How did I miss the first three?! There was enough background woven into the story that it was a great read on its own, but I really want to go back and start at the beginning now! Great characters and storylines. I'm really interested to meet Davie in the beginning and follow his development and how he came to the place he finds himself in this story, wanting out of the Life.

The Life is the life of an enforcer for a big time gang boss in the underbelly of Glasgow, Scotland. Davie was born into the life, but lately he fears the dark is taking him over. He wants out before there is nothing worth redeeming left. Might not be as easy as he thinks though!

I was taken with the ability Douglas Skelton has to take a totally hard, violent man and humanize him to the point that you find yourself rooting for, even liking this man. He takes us on a ride through a rough and tumble, violent life style without excessive foul language or blood and guts, yet still absolutely conveying the depths of the Life. Our imaginations are free to fill in the blanks. A little more in my comfort zone!

Solid characters, some you like and some you hate!
Big Rab, Davie's long time friend and boss. He always had limits, scruples of a sort. Has that changed?

Jimsie, the new young recruit. Eager to 'do the job' maybe a bit to eager. Can Davie rein him in and warn him about the darkness?

Jerry O'Neill, a family man who did time for a burglary and rape he says he didn't commit. He wants revenge. What will it cost him?

Donna, the new neighbor upstairs. Davie runs to her rescue, but 'she's not what she seems'. Will Davie be pulled in?

Sprinkled throughout are light little incidents that give the book some levity from the darkness of the tale. I got a chuckle out of small time crook and druggy Ricky Ramage...

'The flat was a revelation. They both saw Ramage as an obnoxious wee scroat. McCall kept his place clean, but Ramage's flat positively sparkled. The man himself paced around the room, the gravity-defying fag tucked in the corner of his mouth as he nervously moved things around. He plumped up a cushion on the incredibly comfortable looking settee; he shifted a tasteful little ornament on the mantelpiece; he straightened a magazine that somehow had the audacity to sit slightly askew on the glass-topped coffee table.
'I wasnae expecting company, neither I was,' he said as he flitted about.

and terrified of Davie McCall and what him paying a call might mean, this following a series of tough questions ..

'Ramage paused then, one trembling hand rising to pluck the cigarette from his mouth. A tiny blizzard of silver ash flaked off and snowed on the carpet. He looked down at it mournfully and Donovan got the impression he was contemplating fetching the vacuum cleaner. '

I got a kick out of that exchange and it lightens the mood. Excellent book, read it! But start with the first one if you can!

This book is only available on Kindle in the US right now but the paperback will be released in September. It has already been released in the UK.

Peggy Ann
Posted by Peggy Arthurs at 9:50 AM