No. 9 Belmont Square by Margaret Erskine 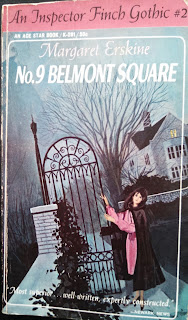 'A strange house, filled with ancient sin - and in it, a frightened girl fighting an evil force she could not see or touch...

No. 9 Belmont square was very old, and so was everyone in it - all but Sara Harkness, and to her fell the responsibility of protecting the people she had inherited with the house.

But one of the seemingly gentle old people was a murderer, and Sara, helpless and alone, stood in the way of a perfect crime.

Just as a plague of new horrors started, Inspector Finch ands young assistant arrived on the scene. Sara was no longer alone - but were they too late to save her?'


Sara inherits this monstrosity of a house and all the old tenants in it. She moves there thinking it will be a good way to earn money and help her brother get his acting career off the ground. Everything revolves around her golden child brother. She did promise her mother she would help him attain the heights they knew he was capable of. But were they wearing rose colored glasses?

After a television program about a famous opera singers life and the story of his romance with a young woman before the war and a mysterious diamond she had, both of which disappeared after the war, was televised everything changed. The opera star showed up at her house looking for the woman and the diamond. Was she one of the old residents? Was the famous Lake of Fire diamond hidden here? What was it about this man that caused Sara to fear him? Were past accidental deaths at the home really murders? When a new murder takes place and Scotland Yard is called in things really heat up! Will the police sergeant be able to save Sara and will their attraction to each other bloom into something more?

The local police are working with Scotland Yard on this one and they are none to pleased to have them in their backyard...

"The Superintendent walked away. Police work was police work and all laid down in the manual but the Scotland Yard man seemed to think it could be worked out by some crazy system of his own."

Sara speaking to Inspector Finch from SY, thinking her brother might be the culprit!

When she did speak it was to say wonderingly, "How patient you have to be once you've killed someone-and how watchful. All these months-years really. alert for any sign of danger, the merest breath of suspicion' She added with a great deal of self reproach, "I don't seem to have been very bright, do I?"

Finch was shocked. "My dear girl, it isn't your place to go around suspecting crime. It isn't even safe. Don't try and find the answer for yourself. The murderer will be watching every move you make in this house. And now he doesn't have so many things to worry about - except to make sure it's a dead body he leaves behind him..."

Is it her beloved brother? You'll have to read it to find out!