A Visit From Alan Jones, Author and Geek!

Thanks for stopping by and explaining all that to us, Alan! 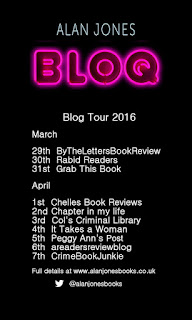 There are two more stops on Alan's Blog Tour for Bloq. Stop over and check out what he's up to there...
on the 6th @areadersreviewblog
on the 7th @CrimeBookJunkie


Bloq has been getting consistent 5 star reviews! Be sure and check it out!

By the Letter Book Reviews