Murder of a Lady (A Scottish Mystery) by Anthony Wynne 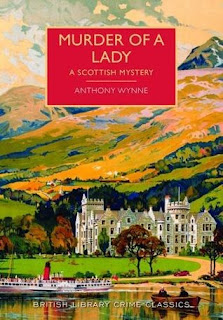 'Duchlan Castle is a gloomy, forbidding place in the Scottish Highlands. Late one night the body of Mary Gregor, sister of the laird of Duchlan, is found in the castle. She has been stabbed to death in her bedroom - but the rooms locked from within and the windows are barred. The only tiny clue to the culprit is a silver fish's scale, left on the floor next to Mary's body.
Inspector Dundas is dispatched to Duchlan to investigate the case. The Gregor family and their servants are quick - perhaps too quick - to explain that Mary was a kind and charitable woman. Dundas uncovers a more complex truth, and the cruel character of the dead woman continues to pervade the house after her death. Soon further deaths, equally impossible, occur and the atmosphere grows ever darker. Superstitious locals believe that fish creatures from the nearby waters are responsible; but luckily for Inspector Dundas, the gifted amateur sleuth Eustace Hailey is on the scene, and unravels a more logical solution to this most fiendish of plots.
Anthony Wynne wrote some of the best locked-room mysteries from the golden age of British crime fiction. This cunningly plotted novel - one of Wynne's finest - has never been reprinted since 1931 and it is long over due for rediscovery.'

Anthony Wynne,  pen name for Robert McNair-Wilson (1882-1963), physician and writer, was born on 22 May 1882 at 7 Kelvin Drive, Maryhill, Glasgow, the eldest of the six children of William Wilson JP, West Indies merchant, and his wife, Helen Hannah (née Turner). In various places online they put him as an Englishmen, but he is Scottish! He wrote 28 detective novels! Sadly for us hard to find now. I hope the British Library will publish many more of them!

I loved this one because it had a crumbling estate in Scotland on a loch and a really good locked room puzzle! It was originally titled The Silver Scale Mystery as there are fish scales found in the wounds. We have not one impossible murder, but 3 more that follow. The fish scales are the main clue throughout the book, but another clue is very little blood even in the wound! Hmm...

The doors in this castle have very sophisticated locks on them. Impossible to jimmy. They were the invention of the Laird's grandfather who was interested in lock making.

"He was. And his interest set a fashion. I've little doubt that the Duchlan of those days acquired his taste for mechanics during a visit to London or Paris. Some years ago I made a study of these eighteenth century locks. Many of them are extraordinarily clever."
"These here are, at any rate.' Dundas rose as he spoke and brought the lock which had been cut from Miss Gregor's door for the doctor's inspection. He pointed to the keyhole. "Observe how the key enters at a different level on each side of the door. That precludes the possibility of picking the lock with a skeleton, or of turning the key from the outside with pliers. You would think there were two locks, indeed, instead of only one, but they're connected."

We get two detectives for the price of one in this tale, Inspector Dundas and Inspector Barley and the methods they used were vastly different.

Dundas more cerebral, thinking and sorting clues...
He laid his pen down beside the champagne glasses and leaned back.
"Detective work is like looking at a puzzle. The solution is there before one's eyes, only one can't see it. And one can't see it because some detail, more aggressive than the others, leads one's eyes away from the essential detail. I have often thought that a painter could make a picture in which one particular face or one particular object would be invisible to the spectator until he had attained a certain degree of concentration or detachment. This room of Miss Gregor's for example, seems to us to be a closed box into which nobody can have entered and from which nobody can have emerged. The consequence of that idea is that we cannot conceive how the poor lady was murdered. Yet, believe me, the method of her murder is there, written plainly in the details we have both observed. When I write, I attain a new point of view that is not attainable when I speak. For example..." He leaned forward again and extended his note-book. "I've written here that you found Duchlan and his household exceedingly reticent about past events. When you told me that I merely wondered why it should be so. Now I can see that, in all their minds, a connection must exist between the present and the past. It follows, doesn't it, that the scar on the dead woman's chest is the clue to a great family upheaval, the effects of which are still being acutely felt, so acutely, indeed, that even murder is accepted as a possible or even probable outcome,"

And Barley more of a bully...
Dr. Hailey found it impossible not to admire Inspector Barley. The man possessed an extraordinary quickness of mind and an excellent imagination which never appeared to escape from the control of his reason. His dramatic instinct, on the other hand, and thickness of his social skin, enable him to launch his formidable questions in a way that served his purpose admiral. Either those whom he was examining became resentful or they lost their composure; he knew how to profit by both happenings. His comb, and his method of polishing his pipe on his nose, supplied the element of vulgarity which is necessary to the success of every charlatan.

If you'd like to check out all the titles of Wynne's 28 detective books look HERE.
Truly superb Golden Age Fiction! Read it!

This book qualifies for the Golden Scavenger Hunt @Bev's My Readers Block for the category mansion!