Hot Springs, NC was a location for a German Interment Camp during WWI. I found that a fascinating piece of history! But let's start at the beginning...

The Hot Mineral Springs were discovered in 1778 by a group of mountaineer white settlers. Artifacts found at the springs supported the claim that the Cherokee Indians used these springs many years before we arrived.

The land and springs were deeded in 1788 and a tavern was built. Travelers during the American Revolution and drovers herding their livestock made it a popular stopping point. In 1828 the Buncombe Turnpike, a toll road that ran from Asheville to Hot Springs and into Tennessee opened.  This brought even more traffic in and the tavern grew into a popular hotel.

In 1832, The Patton Brothers, bought the tavern and made extensive improvements. The Patton was one of the most beautiful resort hotels in the East.  In 1838 a fire destroyed the main part of the hotel and the stables. It reopened in 1839. 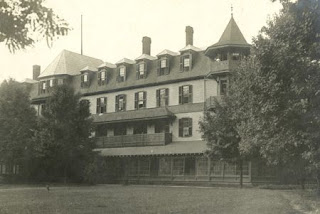 After the Civil War, Colonel J.H. Rumbough bought the hotel and springs and under his wife's influence it became a very fashionable destination point. But once again fire destroyed it in 1884. Rumbough sold the property to a northern organization called the Southern Improvement Company. Costing great sums of money, the four story Mountain Park Hotel was built in 1884 along with the first golf course in North Carolina and a bath house was built over the springs. After the bath, patients would walk to another room and receive a massage or other treatment depending on his condition. The first golf course in the state was a nine hole course adjacent to the hotel. It was called the Wana Luna. At some point Rumbough bought the hotel back.

At the outbreak of WWI travel to the hotel slowed considerably. Mrs. Rumbough had passed away and business was down. Col. Rumbough negotiated a contract with the War Department to house Germans who were in NY Harbor on luxury liners when war was declared. 2,500 passengers, officers and crew members came by train to Hot Springs. Officers were housed in the hotel. Women and children were found rooms in town. The German men built a small village on the lawn of the hotel using Scrap lumber, driftwood and flattened tin cans. The townspeople and the Germans got along very well and made life-long friendships. Adolph Thierbach, one of the Germans was a photographer and he chronicled the time in NC in photographs. You can see these photos HERE. The flood of 1916 damaged the hotel considerably and washed away the German village, tents and barracks constructed on the lawns. No one was lost or injured, thank heavens! In 1918 an epidemic of influenza and typhoid swept through. During this time the government decided to move the Germans to a military camp for the remainder of the war.

In 1920 a fire destroyed the hotel and ended the era of the fancy resort life. The Colonel retired and died in 1924. His daughter Bessie Safford, acquired the property and built The Hot Springs Inn. She had intended it to be a sanitarium but the plan never materialized. She conveyed the property to the Catholic Church for a retreat and rest home. It was used for this purpose only briefly, due to the remoteness of the area and the fact that there were few Catholics in Madison County. In 1940 the hotel property with its springs and 100 acres of land was sold to a group of Marshall Business men. It was operated off and on for several years, but the development of I-40 took traffic away and the area fell into decline. The Rudistill family bought the property in 1956. In 1977 the Hot Springs Inn burned and Hot Springs fell into decline.

The old foundations of the old hotel are still there and the old bath house ruins are there too.  The property is bordered by the French Broad river on one side and a creek on the other. Both shores are lined with Hot Mineral tubs for soaking in. Each one closed in private. We did soak for an hour in a creekside tub. It was nice and warm and so lovely being outside listening to the creek. 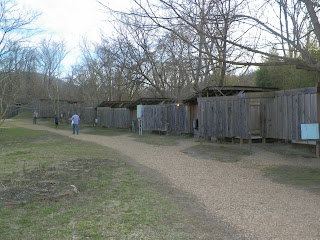 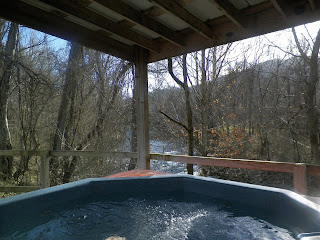 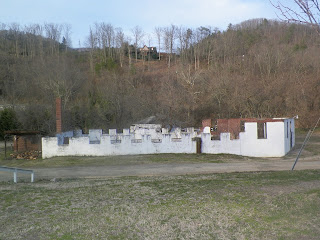 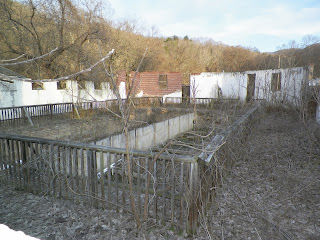 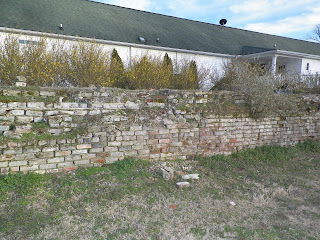 Old bath house from the late 1800's- early 1900's. The bath house was porcelain tubs divided in two rows for men and women.


There are a lot of historic houses in Hot Springs, even a 1912 Sears Roebuck house! Its a lovely home sitting on the French Broad River. Also reputed Indian drawings on the sheer face of a cliff. And Hot Springs boast that it is the only town that the Appalachian Trail goes right down the center of town. Thus those list A's on the sidewalks! Not too many stores to browse, it really is more for rafting, fishing and river fun and a stop over for the folks on the AT. 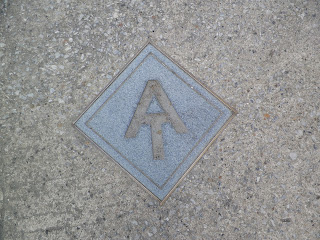 If you get the chance to stop by there, do and eat at the Smoky Mountain Diner!