Indian Peter by Douglas Skelton (with an UPDATE) 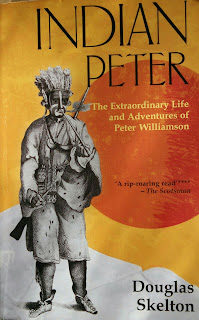 Back of book synopsis...
Indian Peter is the remarkable story of Peter Williamson, who, in 1743 at the age of 13, was snatched from an Aberdeen quayside and transported tot he burgeoning american colonies to be sold into indentured servitude. Unlike many others who found themselves in similar circumstances, Peter was fortunate to be bought by a humane man who left him money when he died, enabling him to buy his own farm after marrying.
According to Peter's own account, his farm was attacked in 1754, during what became known as the French and Indian War, and he was captured by the Indians, who forced him to travel with them as a slave. After escaping, he joined the British Army to fight the French and their Indian allies but his regiment was forced to surrender and he was taken to Canada as a prisoner of war.
When he was eventually freed, Peter made his way back to Scotland and tracked down the men who were behind his initial kidnapping. He accused them publicly and took them to court in a landmark case that exposed the scandal of slave trading.
Once settled in Edinburgh, Peter became a publican, writer, publisher and entrepreneur. He developed Edinburgh's first Penny Post system, launched a weekly magazine and shamelessly exploited his experiences for profit.
Brimming with action and adventure, Indian Peter is a true-life tale of abduction, war and courtroom drama. It is an inspiring story of courage, fortitude and one man's determination to survive against seemingly insurmountable odds.

I went in search of  a Douglas Skelton crime novel and ended up getting this historical non-fiction! I really enjoyed this book. The ship Peter was carried to America on wrecked on an island off of Cape May, New Jersey. I've vacationed there several times. Most of Peter's exploits happened around my old stomping grounds in Pennsylvania and Ohio so this book had so much local flavor for me! Fort Pitt, Fort Necessity, Gnadenhutten Ohio, where there are now memorials and a recreated village both in Schoenbrunn and Gnadenhutten. And I've read Winning of America books by Allan Eckert about the frontier and the Indians from this area in the past so this was great seeing it from the eyes of a Scotsman!

Of course how much of these exploits of Peter's are based on fact will never be known as all we have to go on are his tales that grew taller each time he told them. His recounting of the massacre at Gnadenhutten is way off so I would be confident he never saw that, but was going word of mouth and getting most of it wrong. He sets it in 1755 on the Lehigh River. Gnadenhutten (zhi-nay-den-hut-ten) was not even established until 1772, 17 years later, and it was on the Clinton River in Ohio, the Lehigh River is in far east Pennsylvania. He states 11 people died in the attack, but in reality it was 96 Moravian Indians that were brutally murdered. The leader of the raiding party was a Williamson but a Col. David Williamson. Peter was already back in Scotland by the time this happened, but keeping up with the news of the colonies, seems to have inserted himself into things that happened even after he left America! But this book is not about set historical facts, its the tale of a larger than life personality and let me tell you he makes for a great read!
UPDATE:
After speaking to Douglas Skelton I found out that there were two Gnadenhutten's! The one in the book is in Pennsylvania and on the Lehigh River and happened in 1755 just as Peter said. I only knew of the one in Ohio which I lived about 1 1/2 from for many, many years. When I tried googling it I put in Gnadenhutten and New Gnadenhutten and all that came up for me was the one in Ohio. After speaking to Douglas I googled Gnadenhutten Pennsylvania 1755 and low and behold, there it was! I learned something new! You can too, stop over HERE to read about it!

To think how evil those men where in Aberdeen, kidnapping children and the things those kids went through are just unimaginable! That alone makes a mesmerizing story. I'm so glad Peter got his just reward against them in the end! The real heart of this story is the amazing things Peter accomplished after returning to Scotland in his late twenties! I've stood on the Heart of Midlothian in Edinburgh where the tollbooth prison stood in Peter's day. Right across the street from his business booth! Next time I go to Scotland I'll see it differently now with all the tales of Peter in my head. I'd love to go to his gravesite. The poor man didn't even get a headstone! It's unmarked. I think we should start a fund to get him a small acknowledgement!

If you get a chance to read this book I highly recommend it!

Light bulb moment! I'll do a give away of my copy. I'll only be able to do this in the US or Canada as shipping overseas is so high. If you want a copy, pick a number from 1-20 and tell me in the comments and the one closest to the number I've picked gets the book! I'll safely tuck away the number I pick with Katrina @Pining for the West in Scotland and she can verify I'm not playing favorites or anything! I'll pick someone in a week!

If your interested in the Gnadenhutten massacre there are lots of sites out there to read up but HEREs one for you to jump quick to.
Posted by Peggy Arthurs at 10:15 AM