The Loch by Janet Caird 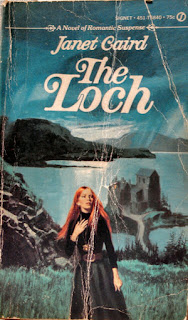 Crouching in the cave, Janet listened with straining ears. A blanket of darkness pierce by tiny flashes flickered in her eyeballs. A footstep set the gravel rattling on the rock. This was nothing imaginary. this was terrifyingly real. She began to edge her way forward as noiselessly as possible, but behind her she heard the footfalls again. And again. Terror came alive as she sank against the wall, trying to muffle her breathing.

The footfalls were coming down the passage of the cave - a soft pad of bare feet on rock. They crossed the floor - one, two, three. Janet felt a foot against her leg - and began to scream...  (inside cover)

This gothic suspense opens with a bizarre tidal wave hitting the town of Lochy. It sits on a great, deep, black loch somewhere in Scotland. A peaceful sleepy town. After they recover from the flood, people start noticing the loch seems to be losing its water! Getting lower and lower each day until it is empty. A strange eeriness descends on the town and no one wants to talk about the loch. Now an empty, dry sea bed, a cave has been revealed up on the cliffs. What mysteries does it hold? When Evan Ritchie, the town adventurer decides to climb the cliffs and investigate Janet stands at the edge of the loch bed and watches. Suddenly Evan is catapulted out of the mouth of the cave. Did he just lose his balance and fall or was he pushed? Janet is sure she saw movement at the cave before and that she saw a figure push Evan. But how could that be? Evan's body is battered and obviously tampered with. Someone or something is living in the cave!

Alan, a local administrator in town and John the new minister are both sweet on Janet. The three of them decide they need to find out what is going on in the cave. What the men find there is mind blowing!

This was a sweet read! Great suspense and unusual tale. I felt like I was on Loch Ness reading it. I enjoy Janet Cairds books. This is the third one I've read.