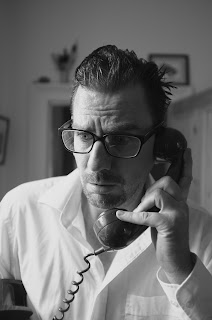 James Roberts is a forty-something writer and misanthrope who currently resides in the remoter outreaches of the Highlands of Scotland. He states his profession as 'freelance copywriter', being far too vain and supercilious to admit to being 'mostly out of work'. He has previously found gainful employment as a cocktail waiter, a vendor of cleaning cloths, a lecturer in modern history, a car salesman, a private tutor working with the financially advantaged, a care assistant working with the mentally disadvantaged and a fruiterer’s assistant. Some of these jobs he has been properly qualified for.

The epitome of the hermetic scribbler, James describes the content of Facebook, Twitter and Instagram as "nauseatingly narcissistical dribble" and litters his correspondence with pidgin Latin aphorisms ad adsurdam omne ignotum pro terribili (as he would say), solely to annoy the younger generation. His website, www.jamesroberts.scot, where he can be found hiding behind the absurd nom de plume 'The Proprietor', eschews the potted author biogs, giveaways and blog tours expected of the serious indie author. Instead he subjects the unsuspecting browser to an outré discussion on the merits of the French post-structuralists, offers a 'BlogSpot' to '70s silver spooned novelist Jasper Wallet and gives Charles Dickens a social media makeover. It is, in sum, a study in self-marketing suicide.

Even more disturbing, extensive research into the author's background turns up the following entry on Google: James Roberts was the best-selling author of over a hundred books on topics as diverse as railway signalling and marital sex and his work had been translated into seventy three different languages including Welsh. In 2007 James was jailed for copyright infringement and serial plagiarism and having sex with a miner {a Welsh one}.

Recent telegraphic communiqués with the author have, however, elicited the assurance that James is now fully rehabilitated and divides his time between performing highly situational street theatre with live rabbits and lying to the nice people at Job Centre Plus.

Pardon Me: A Victorian Farce is his first novel. Or so he says.

And now a word from James, okay a lot of words from James... 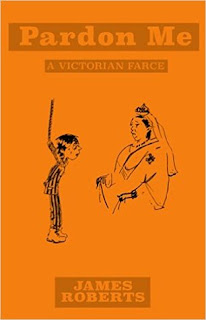 When invited to do this spot of 'guest blogging' I noted with interest that our charming host is a bit of a 'foodie', as the media in the UK are want to describe epicures and gastronomes. As I myself exist on a purely coffee and vin diet, I decided to forego any personal anecdotes and offer up the digestible content of my new novel, Pardon Me: A Victorian Farce, for you're delectation. Before I begin it may help if I supply a little contextualisation. Pardon Me recounts the adventures of a hapless British diplomat by the name of Madagan Rùn, despatched to South Africa to handle a dangerous outbreak of, what Oscar Wilde once described in court as, "the love that dare not speak its name." Without wishing to spoil the plot, such as it is, the fact that the novel is an epistolary written by Madagan to Queen Victoria whilst he languishes in the Tower of London awaiting execution for Treason, indicates that things do not go altogether swimmingly.

The first 'meal' consumed by Madagan in the story goes some way to explaining the total dog's breakfast he makes of his mission. Having had his glans penis scarified sans ether, following a rather unfortunate case of mistaken identity, Madagan goes in search of some pain relief. In order of consumption, he digests the following: a packet of Goulard's Extract® and a tube of Patented Pulmonic Borax Glycerine® (by prescription, one to be taken orally, the other applied liberally to the affected area, ambiguous instructions, results disappointing); a jorum of rhubarb and magnesia, some green Indian Pills and a half bottle of nerve tonic wine (effect not unlike trying to put out the Great Fire of London with a glass of cherry bounce); two packets of Lloyds Cocaine Toothache Drops®, a phial of laudanum and a goodly amount of finest quality, A Grade, apothecary strength heroin (worked rather too well, led Madagan to 'go on a bender' as they say).

Now according to some historians, freely available 19th Century narcotics of the type described heretofore were often a great boon to creativity. Take the poet Samuel Taylor Coleridge, they say, heavily under the influence of 'the poppy' when he wrote Kubla Khan. Or Lewis Carroll, Anglican Deacon by day, dropped a couple of Bunter's Nervine Tablets one evening to rid himself of a migraine, wrote Alice in Wonderland. Well not so Madagan Rùn,  who retches up a quart of 'phiz', falls asleep in a privet hedge and  then gets himself embroiled in lavatorial improprieties with a famous playwright who shall remain nameless.

From here, gastronomically speaking at least, things improved somewhat, albeit temporarily. The feasting and sluicing on the steamer to the Cape is of the highest standard. Here is a sample menu: Braised Poulet aux Champighons, Cotelets de mouton, sauce tomates, blancmanges, figs and a Gin and Bitters with quinine to finish. I personally don't speak much French, but it all sounds terribly bon. Mind you, some of the acquaintances Madagan makes on board are not quite so savoury, especially the evening he ends up doing the par du deux with Witt van Rudkill, a senior member of the Transvaal Afrikaan Boers who he mistakes for a Cook's Tourist and subsequently spills one or two state secrets - which, as excuses go, is pretty shabby I am sure you will agree.

Once back on terre ferme the F&S takes a turn toward the spartan. Madagan quite rightly turns down the offer to purchase a selection of luxury items - Martell, Hennessey, Beams, Cavendish, Turkish Latakia, Havana, Cadburys amongst them - from Cape Customs, for the sound reason that the goods are clearly stolen, and the customs officials are clearly foreign. On the three week buffalo trek from Port Elizabeth to Johannesburg, journeying under reddened skies in roasting temperatures; against biting dust storms as sharp as needles; across barren stoeps and granite kopjes where only the occasional low-hanging eucalyptus tree provides a break from the dull red soil and sickly yellow-green grass of the veldt; Madagan and his batman Lumbago survive on a diet of native mealie and biltong with only boiled grass to wash it down with. For those of you who have never dined al la buffalo cart, mealie is a Zulu dish, the ingredients of which include cow-dung, whilst biltong consists of sun-dried meats, the 'meats' in question very much depending upon what's available locally. Our intrepid travellers sample lizard, caterpillar, earthworm and an unfortunate klipspringer that had been rundown by a missionary driving a burro {a mule led vehicle notoriously difficult to steer}. It must be said that the frequent appearance of biltong on the menu in these parts very much explains the popularity of mealie.

Arrival in the gold shanty town of Jo'berg provides little respite from the table d'hôte. On first making the acquaintance of Big Chief Mwanga, the Cape's most notorious gambler, money launderer, whore mongler, black marketer, drug dealer, arms dealer, sodomite and murderer, Madagan briefly worries that he himself may be about to appear on the menu. Even when Mwanga proves to be the most delightful of hosts, the carte du jour at his Coco Kabala Casino & Knocking Shop causes some more unwanted confusion. Select from the following:

Christmas dinner with Cecil Rhodes and his adjutant Doctor Lander Starr Jameson only serves to prove the point that the Transvaal, whatever the Afrikaan Boers may say, is not exactly the Garden of Eden. Indeed, it is not the garden of anything. The festive meal begins traditionally with a soup course, described as la potage d'hôte de nos jours, though quite what this is no one is too sure, but it is rather viscousy. Next comes the fish course: Snoek, a perch-like sort of poisson, though more rubbery than perch, far more rubbery actually, like something one might buy the cat to put it off hanging about the ornamental fishpond. And so to the main course: broiled bustard, the 'bustard' being a variety of la grosse en dindon noted throughout the Cape for its refusal to fly and its tendency to go honk-honk all the time, which is really most annoying. The meal is suitably 'complemented' by a number of local vins, all of which have the added ingredient of Phylloxera; a wee beastie that infects the grape and leads the more inventive natives to call it 'Wolves Whizz' and use it to creosote their huts.

To add insult to injury (and food poisoning), this will prove to be Madagan's last proper meal of the book. From hereon he must subsist only upon a diet of watery gruel and tepid ditch water. For guest of Queen Victoria at the Tower of London apparently deserve no better. And if you want to know whether this meagre fayre will prove to be Madagan's last - well buy the darn book and find out, it's only $3.99, or the cost of a starter.

And now about the book...

Read an excerpt from Pardon Me


Be sure and stop over and check out James' website. Or his Goodreads page.

Book synopsis:
The year is 1896 and following a brief, if lively, spell in the diplomatic corps, Madagan Rùn is being executed for Treason. Posted to the lawless goldfields of the Transvaal to act as ‘honorary attaché’ to the British Empire’s most energetic pederast, young Madagan, in the avoidance of his duty, has managed to instigate the greatest challenge to Pax Britannica since the Indian Mutiny of ’57.

Now here's the pity of the tale. To exculpate himself from the hangman’s noose Madagan must, perforce, lay bare the grievously stained undercarriage of Victorian high-society (so to speak): starting with fantastical revelations vis-à-vis the making, lending and subsequent mislaying of the world's first ever celebrity sex celluloid. And speaking as a loyal subject of Queen, Country and Empire...well he would rather 'keep mum'.

No less an august triumvirate than Cecil 'Colossus' Rhodes, Joseph 'Radical' Chamberlain and Prince Victor 'call me Vicky' Albert have reason aplenty to pray Madagan takes his secrets with him to the gallows. Sadly for them the cleverest man ever to wear mink trousers, the florid and faintly familiar Mr Melmoth, has just posted a Remington Typewriter® to the Tower and instructed his chum Maddy to tell the old Queen everything, with the urgent codicil to Pardon Me.

James being a Scot, this book would be a good selection for Read Scotland 2016!!!

Posted by Peggy Arthurs at 1:18 PM