Abner Daniel by Will N. Harben

'The negro placed the point of his plough share a few inches from the first stalk of corn, wound the line around his wrist, and clucked to his horse. With a jangling jerk of the trace-chains the animal lunged ahead: the polished ploughshare cut into the mellow soil and sped onward, curling the gray earth like shavings, and uprooting and burying the tenacious crab-grass and succulent purslane. It was a beautiful day. The sun was shining brightly, but the atmosphere had dropped a dim veil over the near-by mountain. Even the two-storied farm-house, with its veranda and white columns, to which the field road led up a gradual slope, showed only its outlines. However, A lan Bishop, as he steadled his gaze upon the house, saw the figure of an elderly woman come out of the gate and with a quick step hurry down to him. It was his mother; she was tall and angular, and had high cheek-bones and small blue eyes.'

Biography:American writer William Nathaniel Harben was born in 1858 in Georgia, and died in New York City in 1919. Married to Lula Maybell Chandler, Harben had three children. He was popular for short stories and novels featuring life in northern Georgia such as The Woman who Trusted (1901), The Georgians (1904), and Ann Boyd (1906). 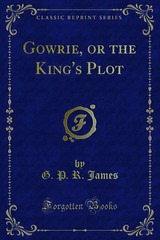 On the 15th of A ugust, 1599, a young man was seen standing on one of the little bridges in the town of Padua. He was plainly dressed in an ordinary riding habit of that period, having a short black cloak over his shoulders, a tawny suit of cloth below, and a high crowned hat with a plume of feathers falling on one side. In most respects his apparel indicated no higher station than that of a respectable citizen, and indeed citizens of his age, for he could not be more than two-and-twenty, very frequently displayed more gaudy feathers, although the bird they covered might be of inferior race. There were, however, one or two marks about him which seemed to point out a superior station. Instead of a large fraise or ruff round his neck, which was then still common, he wore a falling collar of the richest and most delicate lace, tied in front of the throat by a silver cord and tassel ;and though the sheath of his long rapier was merely of black leather, the hilt of the weapon, as well as that of the dagger to his girdle, was of silver exquisitely wrought. His large buckskin gloves, too, were edged with a silver fringe, and embroidered upon the back. In person he was tall and finely formed, with a highly intelligent and expressive countenance, somewhat stern and determined, indeed, for one so young, but yet with a strange mingling of lofty thoughtlessness and careless ease. He was perfectly alone, though on that day the citizens of Padua were all in full holiday, the bells of the churchesringing, and the cannon firing from the ramparts. Every one seemed to have got a companion but himself; and all the streets in the interior of that city of numberless arcades, were thronged with groups celebrating the holyday, the Assumption of the Blessed Virgin, while he stood alone on the little bridge, as I have said, near the Ferara gate, which was left to comparative solitude.

Dick Kent in the Far North by Milton Richards

The Battle of Gettysburg by W. C. Storrick