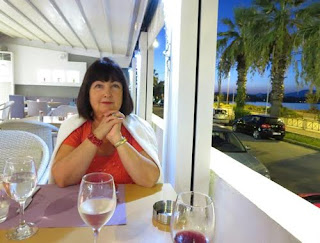 Today I'm pleased to introduce guest blogger, author Gwen Parrott here at the Post! Gwen wrote the book Dead White, a popular Welsh crime novel. I'll be reading the first English translation of it next. Looking forward to it and sharing it with you all. Thanks, Gwen for stopping by! 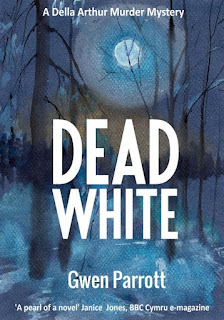 During the harsh winter of 1947, Della Arthur arrives at a remote Pembrokeshire village in the middle of a snowstorm to take up her new job as headteacher of the local primary school. Losing her way from the train station, she comes across a farmhouse and takes shelter there. After finding two dead bodies inside, Della struggles to discover the truth behind their deaths. She soon realises that in this close-knit community, secrets and lies lurk beneath the surface of respectability.
Della must choose who to trust among the inhabitants of this remote village – should she reveal what she knows to the sardonic minister of the local chapel, Huw Richards, or the Italian prisoner of war, Enzo Mazzati? Della finds herself under siege on all sides, and encumbered by an unwelcome lodger, a missing colleague and a disturbed pupil. It is only when her own life is threatened that she understands how dangerous her discoveries in the farmhouse really were.

“I was so impressed by so many things in this book – its characters, its period detail which really comes alive in a very convincing way, through the conversations of people, without bogging you down at all.”
Radio Cymru Book Review by Bethan Mair

“A pearl of a novel which crosses several frontiers. I really hope that we will hear more from this author.”
Janice Jones in BBC Cymru e-magazine

A Pageturners Crime Publication. This is the first English language, digital edition of the acclaimed Welsh language novel.