Another Dash O' Doric by Norman Harper and Robbie Shephard

Back of the book:
'Great Grandma peered into the week-old bundle of humanity that had been pressed into her bosie. His little hand grasped her crannie and she allowed herself a wee smile. Then she frowned and looked up. 'And fit are ye ca'in him?' she demanded. 'Nathan' said the proud young mum. 'Aww ye go,' she snapped. 'Ye'll hae ti ca him something.'

Bill Mowat turned up at his Peterhead local with his arm in a sling. The regulars looked him up and down and demanded to know how the accident had happened. 'If ye must ken,' said Bill, 'It got broke fechtin for a lassie's honour.' 'Is that so?' 'Aye, she wintit ti keep it.' 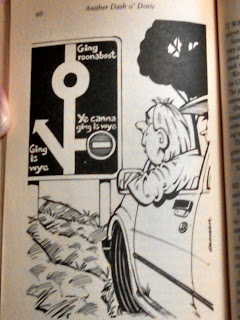 Norman Harper and Robbie Shepherd follow the best selling A Dash O'Doric with another collection of over 200 humorous stories gathered from throughout the North-east of Scotland, continuing their exploration of one of the country's most distinctive senses of humor.'


I picked this book up while in Scotland. A lot of the humor went over my head as I think it is specific for the north-east region of Scotland and their particular type of humor. But, I still had fun reading it and got quite a few laughs out of it. I enjoyed peeping into another culture's style of humor and learning all the wonderful Doric words with the help of the glossary at the back of the book as well as the fun cartoons sprinkled throughout.

I could definitely relate to this funny...

Aggie and Sandy, from a crafty not a million miles from Lonmay, had been together 45 years when Sandy retired from his life as a farm-worker. It was to be a big upheaval for Sandy, who was set in his ways. The same would have applied, presumably, to Aggie, having been left on her own for most of the days.
A neighbor ventured to ask as to how she was looking forward to retirement.
'Ach,' she said, 'it'll jist mean twice as muckle o the man and half the siller.'
(translation: twice as much of the man and half the money)

That's what I have to look forward to starting Dec. 1st!