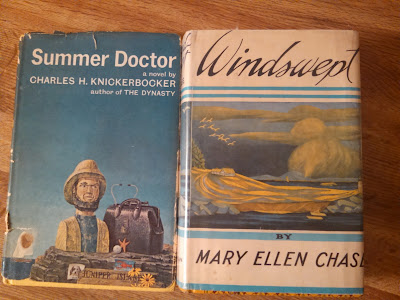 I got two lovely old copies of stories set in Maine while I was in TN. One at a Goodwill shop and one at an antiques shop. Aren't they beautiful?!

Book Description:
Windswept is a novel set on the coast of Maine, which Miss Chase knows so well and which is the background for her earlier novels, Mary Peters and Silas Crockett. But the scene of her new story is eastern Maine, that less known region of open, trackless, often barren land facing the open sea.
Windswept is the name of a house on a high promontory of land miles from villages or towns. Its name suggests alike the nature of its background and the character of its atmosphere. It is the home of the Marston family, built under tragic circumstances by John Marston, lived in and loved by his children and by their children. And yet its long influence extends beyond the Marston family to others, to the Bohemians Jan and Anton, to Adrienne and Julie, into whose life it enters and whose thoughts it forms.
Windswept thus becomes more an American novel than one only of Maine or even New England, for in it Miss Chase has portrayed the past and the present of America, the gifts and graces of her newcomers as well as the contributions of her older stock.
Windswept is a way of life as well as an absorbing story of tragedy and conflict, pain and pleasure, sacrifice and fulfillment. Against its wide, somber background of wind and sea and sky, those who know it, both in the past and in the present, find the answers to their questions and through it discover that life in a confused world may preserve its order, nobility and richness.
"Nothing commonplace could happen here," Philip Marston thought, "nothing mediocre or mean. Perhaps that was why men had shunned it as a dwelling place, having been made vaguely uncomfortable by its nobility and dignity as well as fearful by its solitude. Events could not pass here into the nadir of forgetfulness. Whatever dramas were enacted here upon this stage, against these settings, behind this orchestra of wind and surf, should by right call forth in those who played their parts only constancy and honor... For this was an old and wise land, a long uninhabited and forgotten spur of a new world, which elsewhere seemed to grow newer instead of older. Here one could, if he would, catch something of that wisdom which life in most places and under most circumstances leaves unfinished, even undiscovered."
As every one who has read any of her books realizes, Miss Chase writes unusually beautiful prose; and her it is at its best.

The other book Summer Doctor is by Charles H. Knickerbocker and written in 1963. Charles Knickerbocker was a physician himself who practiced on a resort island off the coast of Maine. He also practiced internal medicine in Bar Harbor.

Book description:
This is a novel about a very unusual kind of a doctor. Daniel van Dine, MD is inclined to wear coveralls, a flannel shirt, and hip-length fisherman's boots and he has a sense of humor. He is a nonconformist and a humanist with a keen sense of history. His religious inclinations are rather strong. He is constantly seeking the reason for human suffering and pain. He feels that a deeply personal doctor-patient relationship is more important than the glamor of medical progress.
Dr. Dan decides to locate on a remote island off the coast of Maine. Here, he will be very busy ten weeks out of every year, for Juniper Island is a summer resort. Here, also, he will be lonely, for the conditions in the winter are primitive and the island is inhabited then only by stubborn and cantankerous fishermen.
This is Dr. Dan's own story of his first three years on Juniper Island. He treats his patients with compassion and individual understanding. He discovers that a doctor can learn more from his patients than he is ever taught in medical school.
Among his patients and neighbors are a much-married millionaire, a fisherman with a curious sense of ethics, a gloomy anthropologist, a violent artist, and a displaced cleric. Among the women who influence him are a city fashion editor, an ex-chorus girl, a spinster librarian, a gin-loving Indian mid-wife and an unusual adolescent. One of these manages to marry him. Also, he owns a dog , a mangy hound answering to the unlikely name of Slob.
Dr. Dan tells his story with wit and wisdom. His career its one of growth, and he reaches certain conclusions of interest to doctors and patients alike.

I can't wait to see which he marries! You can see all the books by him over at Goodreads

Do either of these sound interesting to you?