The Yellow on the Broom by Betsy Whyte 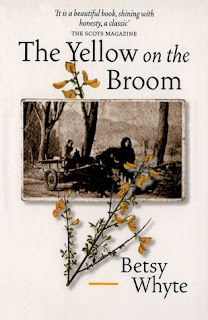 backcover:
Betsy Whyte was born into a traveller family in 1919 and brought up in the age-old tradition of the 'mist people' - constantly moving around the country and settling down in one place only during the winter. It was while the family were 'housed up' at this time of year that she received her education, attending a number of village schools before winning a scholarship to Brechin High School, where she was the only traveller child. She gave up the traveller life when she married in 1939 and started writing about her childhood in the 1970's.

The Yellow on the Broom is the first part of Betsy Whyte's autobiography. Not only is it a fascinating insight into the life and customs of traveller people in the 1920s and '30s, it is also a thought - provoking account of human strength and weakness, courage and cowardice, understanding and prejudice by a sensitive and entertaining writer.

'...this gifted woman, who had first become noted as a champion storyteller and ballad singer, the star of ceilidhs and folk festivals, was also a born writer...'
Hamish Henderson

'...a splendid picture of a vanished way of life, and a hardy people whom progress did not know how to value.'
Evening Telegraph


Reading this was much like sitting across the table from Betsy with a cuppa tea! She truly is a storyteller. This book is a precious look inside a long gone way of life. Set in Rural Scotland in the 1920s-'30s. These people lived hard lives, filled with prejudice against them but remained loving, joyful and optimistic. Trusting God to supply their needs and grateful all they had. Can't wait to read the second book, Red Rowans and Wild Honey.

On work...
Although Father and his brothers worked, I doubt very much if they would have worked to a boss for very long, or even for a full six months at a time. I have often heard them say 'The country folks are all so silly. They start to work at fourteen, or even earlier, and go on working right up till they are old men, never taking any enjoyment to themselves.' Few fates seemed worse to a traveller than this. Most of them were good workers, and few men could beat them at any kind of piece-work - as long as they felt they were working for themselves.
But to work for a boss? oh no, that was beneath their dignity. I've often heard such remarks as 'The big greasy farmer came in-aboot in a flat car, stepping out curling his mustache and shouted at me toga on with it. Me, the cold sweat running down my brow and my stomach croaking with hunger. No, no, I told him to stick his hay in his backside' - but that is not the word they used.

on babies...
We didn't bother putting up any tents that night. We gathered rushes and grass to make beds on. Bella lay with her baby cuddled in her arms. all traveller women did this, and never have I heard of one being smothered-although I have seen babies sucking away at their sleeping mother's breast. yet the mother would awaken instantly if the baby coughed or was sick or struggled for more space. So Bella's infant was cosy enough although we had no tents up.
(We were not allowed to call the baby his name yet because he had not been christened, and it was considered unlucky to call a child by name until it had been christened.)

Code of conduct...
It was Johnnie Whyte, my uncle, who was married to one of my father's sisters. He seated himself on the rail at the side of the cart. Now this Johnnie Whyte was an off-taking, impudent  blowhard of a man. My father and his brothers could have murdered him at times but he had no relatives - and they would never dare to hit a man who was just himself among them, with nobody at his back.

Dangers of life on the road...
I remember one time, when I was about six, we were camped beside a wood near Kirkmichael. I don't remember what time of year it was, but there were five or six families of us working at cutting down bracken.
Anyway, we were not long in bed one night when a terrible gale got up-the like of which i had never heard before or since. 'Up with youse, as quick as you can, bairns! Hurry before we're all made in atoms!' It was dark inside the tent and everyone was groping for something to put on. I could hear zinc baths, basins and anything that was kept outside, rattling against trees and against the fence.
Once Daddy had lifted a corner of the tent door, which had been secured with a heavy stone, the force of the wind was too strong for us bairns to get out and it was impossible to speak. I felt Mother grab me and throw me over her shoulder. Then she was trying to get her plaid over me as she held on to my legs with one hand and also held her eight-month-old baby on the other arm. I don't know how long she fought the wind like this before she put me down, peering to see was I alright, still gripping my wrist tightly. Then she turned her attention to the baby lest it should be smothered, as she had been forced to cover its face with her plaid.
We were out of the reach of falling trees now, but huge branches were hurtling past us in the wind. I could see Daddy a bit in front of us and I was sure that something had hit him as he was stumbling, crawling and falling every time he got up. He had Katie in one hand and little Andy in the other. I could see Daddy's two white hips in the semi-darkness and, as there was something trailing about his feet, I thought his trousers had fallen down.
The wind was choking me as I felt Mother throw me over her shoulder again. I don't know how she managed to there, but next time Mother put me down we were at the other side of the moor beside a deep dry ditch. I felt Daddy pull me into the ditch. 'Are we all here?' Mother asked. She was pulling us to her to make sure we were alright.
Then she shouted to Father 'You are a clever man, you could have been over here and with the weans and back to help me.' Father was giggling and laughing. 'Maggie, no wonder I couldn't do anything- I've got my legs into the arms of my jacket!' Soon we were all laughing at Daddy. A huge branch of a tree hurtled right over our heads as we squatted in the ditch, bringing the laughter to an end. 'God have mercy on man,' Daddy wailed, 'we are all going to be blown into eternity.'...

And you'll have to read the book to find out what happens during this storm!