One in a series of 4 books.

'Dorothy and Betty plan a visit to a friend in Peekskill, but the plane runs out of fuel, forcing them to walk in search of help. On their way they encounter a mysterious cabin where a young man is being held captive.'

'This is the story, among others, of Henry the waiter—or, as he now prefers to call himself, Henri—told to me in the long dining-room of the Riffel Alp Hotel, where I once stayed for a melancholy week “between seasons,” sharing the echoing emptiness of the place with two maiden ladies, who talked all day to one another in frightened whispers. Henry’s construction I have discarded for its amateurishness; his method being generally to commence a story at the end, and then, working backwards to the beginning, wind up with the middle. But in all other respects I have endeavoured to retain his method, which was individual; and this, I think, is the story as he would have told it to me himself, had he told it in this order: My first place—well to be honest, it was a coffee shop in the Mile End Road—I’m not ashamed of it. We all have our beginnings. Young “Kipper,” as we called him—he had no name of his own, not that he knew of anyhow, and that seemed to fit him down to the ground—had fixed his pitch just outside, between our door and the music hall at the corner; and sometimes, when I might happen to have a bit on, I’d get a paper from him, and pay him for it, when the governor was not about, with a mug of coffee, and odds and ends that the other customers had left on their plates—an arrangement that suited both of us. He was just about as sharp as they make boys, even in the Mile End Road, which is saying a good deal; and now and then, spying around among the right sort, and keeping his ears open, he would put me up to a good thing, and I would tip him a bob or a tanner as the case might be. He was the sort that gets on—you know. One day in he walks, for all the world as if the show belonged to him, with a young imp of a girl on his arm, and down they sits at one of the tables.'
Get it here. 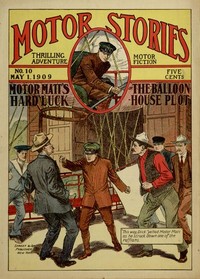 What a gorgeous cover! This is one in a series. Get it here.

MOTOR STORIES - THRILLING ADVENTURE MOTOR FICTION.
Characters that appear in this story:
Matt King: concerning whom there has always been a mystery—a lad of splendid athletic abilities, and never-failing nerve, who has won for himself, among the boys of the Western town, the popular name of "Mile-a-minute Matt."
Carl Pretzel: a cheerful and rollicking German lad, who is led by a fortunate accident to hook up with Motor Matt in double harness.
Dick Ferral: a Canadian boy and a favorite of Uncle Jack; has served his time in the King's navy, and bobs up in New Mexico where he falls into plots and counter-plots, and comes near losing his life.
Helen Brady:Hector Brady's daughter, who helps Motor Matt.
Hector Brady: a rival inventor who has stolen his ideas from Hamilton Jerrold. His air ship is called the Hawk and is used for criminal purposes. Brady's attempt to secure Motor Matt's services as driver of the Hawk brings about the undoing of the criminal gang.
Hamilton Jerrold: an honest inventor who has devoted his life to aëronautics, and who has built a successful air ship called the Eagle.
Jameson: a rich member of the Aëro Club, who thinks of buying the Hawk.
Whipple, Pete, Grove, Harper: members of Brady's gang who carried out the "balloon-house plot," which nearly resulted in a tragedy, and finally proved the complete undoing of Hector Brady.
Ochiltree: an ex-convict whose past record nearly got him into trouble.
Harris: a policeman of South Chicago who aids Motor Matt in his work against the Bradys.
Dennison and Twitchell: police officers of Grand Haven, Michigan, who take a part in the final capture of Brady. 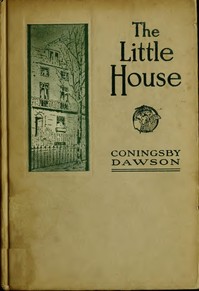 Written in 1920 a WWI story set in England, this is a children's story told from the point of view of a house!

Get it here
Posted by Peggy Arthurs at 12:00 AM