The Willows by Algernon Blackwood
Two friends are midway on a canoe trip down the Danube River. Throughout the story Blackwood personifies the surrounding environment—river, sun, wind—and imbues them with a powerful and ultimately threatening character. Most ominous are the masses of dense, desultory, menacing willows, which "moved of their own will as though alive, and they touched, by some incalculable method, my own keen sense of the horrible.""The Willows" is one of Algernon Blackwood's best known short stories. American horror author H.P. Lovecraft considered it to be the finest supernatural tale in English literature. "The Willows" is an example of early modern horror and is connected within the literary tradition of weird fiction. 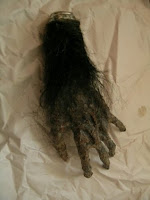 The Monkey's Paw by W.W. Jacobs

Without, the night was cold and wet, but in the small parlour of Laburnam Villa the blinds were drawn and the fire burned brightly. Father and son were at chess, the former, who possessed ideas about the game involving radical changes, putting his king into such sharp and unnecessary perils that it even provoked comment from the white-haired old lady knitting placidly by the fire. "Hark at the wind," said Mr. White, who, having seen a fatal mistake after it was too late, was amiably desirous of preventing his son from seeing it. "I'm listening," said the latter, grimly surveying the board as he stretched out his hand. "Check." "I should hardly think that he'd come to-night," said his father, with his hand poised over the board.

Ghost Stories of an Antiquary by M.R. James
Sometimes the greatest horrors lurk in the most mundane placesThis collection features some of M. R. James’s greatest tales of the supernatural world crossing over into our own. In “Number 13,” an inn that previously belonged to an alchemist changes dimensions in the night. “The Mezzotint” features a painting of a house reenacting a gruesome scene from the house’s history. In “The Treasure of Abbot Thomas,” an antiquary who has discovered the location of a treasure gets far more than he bargained for.James’s tales of the terror that hides beneath the prosaic continue to stun more than a century after they were written.

The Wendigo by Algernon Blackwood

There was something alive and hunting in the north woods as vast as a world. . . . A legend, the Wendigo. The hunter of men.

The Beetle by Richard Marsh
Published in 1897

The thrilling classic tale of a strange and sinister creature that stalks its prey mercilessly and changes shape at willFrom the mysterious depths of Egypt comes a creature “born neither of God nor man.” This shape-shifting being has made its way to London seeking revenge for the crimes that have been committed against the order of its ancient religion—and the primary target of this merciless and relentless terror is politician Paul Lessingham. As panic spreads throughout the city, it falls to Paul and his friends to stop the beast once and for all. Published the same year as the horror classic Dracula, The Beetle originally outsold Bram Stoker’s famous book. Richard Marsh’s story is a dark mirror of England at the end of the century, a tale of Victorian horror and mystery with a monster as dreadful and elusive as any in literature.

One more for measure...

Predating Bram Stoker' Dracula, Carmilla is the ultimate gothic vampire tale—stylish, menacing, sensual, and spellbindingYou are mine, you shall be mine, you and I are one for ever. When a mysterious carriage crashes outside their castle home in Styria, Austria, Laura and her father agree to take in its injured passenger, a young woman named Carmilla. Delighted to have some company of her own age, Laura is instantly drawn to Carmilla. But as their friendship grows, Carmilla's countenance changes and she becomes increasingly secretive and volatile. As Carmilla's moods shift and change, Laura starts to become ill, experiencing fiendish nightmares, her health deteriorating night after night. It is not until she and her father, increasingly concerned for Laura's well-being, set out on a trip to discover more about the mysterious Carmilla that the terrifying truth reveals itself.

Get it here
Posted by Peggy Arthurs at 12:00 AM