First Chapter First Paragraph Tuesday: The Darkness and the Deep

Every Tuesday Diane over @Bibliophile By the Sea host First Chapter First Paragraph Tuesday Intros where we share the first paragraph sometimes two from a book we're reading or thinking about reading soon. 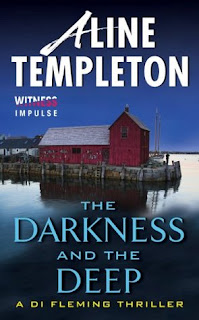 The sea haar came rolling in on an oily swell from the Irish Sea just ahead of the darkness. Now, to the melancholy lowing of the foghorn on the Mull of Galloway, it crept over rocks and bays and low cliffs, stealing light and feature from the landscape. It engulfed the small boat becalmed in the Bay of Luce, then, on its south-west shore, the ancient stone harbor of the port of Knockhaven.

Lights began to appear in the small deep windows of the white-harped houses huddled close along the curve of the shore and in the shops and small terraced houses on either side of the winding ribbon of the steep High Street. They shone from the sprawl of council housing and grey stone villas in the higher, newer part of the town and blazed from the 'executive homes' with sea views, whose picture windows would have found small favor with the original occupants of the little town. Those earliest fishermen derived no romantic satisfaction from gazing out at their workplace and their enemy - even if she was their mistress as well.

The murder accusation was something else. Murder was different. Murder - and they were talking multiple murders - meant they locked you up and threw away the key until you might as well be dead. Probably better dead, at that.   page 255

Teaser Tuesday is hosted by Miz B @ A Daily Rhythm. Post two sentences from somewhere in a book you're reading. No spoilers, please!