Every Tuesday Diane over @ Bibliophile By the Sea host First Chapter First Paragraph Tuesday Intros where we share the first paragraph sometimes two from a book we are reading or thinking about reading soon. 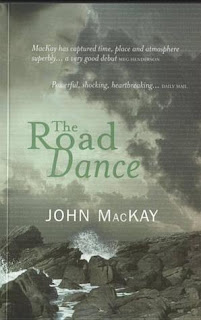 Prologue
There was nothing between here and North America but a heaving, ceaseless ocean. Two thousand miles of emptiness. This small, desolate bay had been caressed and battered by the unfettered seas since the beginning of time. Sometimes the waves could even claw at the cliff tops. Boulders lay at their base, the debris of an endless struggle between raw sea and rock. Today, though, there was a truce. Today the water gently lapped the shore. But even on the best of days the wind still tugged the hair and murmured in the ear.
The old woman moved hesitantly across the stones. The smooth, round rocks rolled against each other unsettling her step. She had not been here in more than half a century and yet she lived so close that the sounds of the shore were with her every morning when she woke and every night when she slipped to sleep.
The rocks sloped up in a dune behind her before being lost in the reeds and ferns, which in turn were overwhelmed by the grass and heather of the moorland. From the cliffs above, the stones were a smear of off-white between the dark of the sea and the green of the land. Standing on them on the shore they were every shade of white and grey, with speckles of pink, blue and ochre glinting even in an overcast light. The prehistoric history of the island was ingrained in these rocks.
Rain clouds smirred the horizon, but for now the grey mists above were content to drift on. A froth floated on the tide, a remnant of the most recent storm. The white of the foam was stark against the slate of the sea as it swelled against the cliffs and stroked the shore.
Had it been like this on that awful morning when The Skipper scanned the shoreline? Had he sat where she was now? What was it that had made him look? A movement maybe, a stirring that disturbed the rhythm of the tide? Had it been the dying spasm of her baby before the old man lifted his tiny body from the sea?

I know that's more than one or two paragraphs, but I just couldn't stop there! Doesn't this sound good? I'm reading this book next. Set in the Scottish Hebrides. Looking forward to it. What say you? Keep reading or no?