Mine is from a book I am hoping to get started on next.
A Chance to Die, The Life and Legacy of Amy Carmichael by Elisabeth Elliot. This biography was published in 1987. 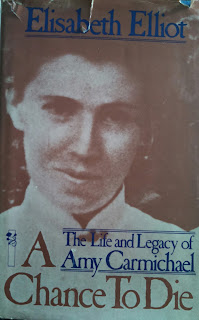 She managed to stuff her two little brothers up through the skylight and then squeezed herself onto the slate roof. Glorious freedom. They stood triumphant in the fresh wind that swept across the Irish Sea.  The water was blue today, which to the girl (perhaps seven or eight years old) meant that it was happy. On some days it was green and angry, on others gray and anxious. Over the rooftops of the village they could see the stony beach and, far off across the water, the great rock called Ailsa Craig, and two rounded hills, the Paps of Jura. Now for the rest of the adventure. Gleefully the three children slid down the slates and paraded triumphantly around the lead gutters-until they saw, gazing up at them, the astonished faces of their parents.

The girl was Amy Beatrice Carmichael, get-great-granddaughter of one Jane Dalziel. It was said that King Kenneth II of Scotland (A.D. 971-995) had offered a reward to any of his subjects who would dare to remove from the gallows the body of the king's friend and kinsman who had been hanged. One stepped forth and said in Gaelic, "Dal ziel." I dare. So Dalziel became his name. That spirit was not much diluted in the child on the roof.

The parents on the ground were David Carmichael, descendant of Scottish Covenanters, and Catherine Jane Filson, descendant of Dalziel. Years later Amy found spiritual significance in this union, as she found spiritual significance in almost everything. Because her mother's ancestors were friendly with certain persecutors of the Covenanters, it was a though persecutor and persecuted were at last united. "So you see," she wrote, "after all, cruelty and wrong are not the greatest forces in the world. There is nothing eternal in them. Only love is eternal."

I adore Amy Carmichael's writings and have used her devotionals for years. A woman so full of love. I did not know she had Scottish roots, that was a sweet find for me!

What do you think? Sound like a good read?