Been Away to Maine!

We were away to Maine last week. A cottage on Sebago Lake. The same one we get most every year. This time though my son and his wife met us there. We had their kids with us. We took the kids last year, but this is the first time for Paul and Stephanie. I've been dying for Paul to get to Maine with us, I knew he would love it! He did! Everyone was talking about 'next summer' before we even left this summer.

The kids never wanted to leave the cottage and the lake. They turn into fish when we are there. The water is cold too, to cold for this old gal to get in. Ian's chin was quivering and his lips were blue, but he wasn't getting out! We did pry them away for a day trip to Portland and a trip to Bailey's Island for a little sightseeing.  Mostly I spent my days doing this...
and this... 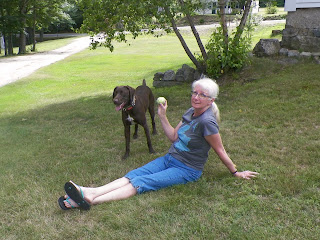 This is Miles. The cottage owner's dog. He is a German Short-haired pointer. Butch brought him home as a puppy while we were there last year. His old pointer, Pat, had passed away the previous fall (2013). Miles was great fun and stayed right with us all the time. The kids loved him.

I made my annual run up to the library book sale in Naples. Their basement has an ongoing sale all year round. I got six books there and 4 at the Goodwill store. 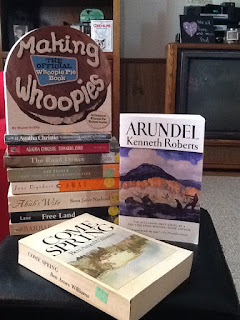 Bought the Making Whoopies at the Portland Head Light gift shop. Maine is known for it's Whoopies, yummy! The little store we walk to has huge ones! We have them in Pennsylvania too, but they call them Gobs here. Two books I was especially chuffed about finding...

When Arundel was first published, the New York Times hailed it as 'an achievement-a really fine and stirring historical novel.' The Christian Science Monitor said, 'As a full-blooded, human chronicle of a gallant adventure, and as a memorial of Revolutionary days in Maine, and as a fiscinating story, this is a book of special importance.'
Kenneth Roberts' rousing tale of colonel Benedict Arnold's doomed march on Quebec in 1775 is as engaging today as when it was first published in 1930. The book tells the story of Steven Nason, a soldier in the Continental Army from fledgling southern Maine settlement of Arundel, who accompanies Arnold's force on the grueling jorney up the Kennebec River and overland through the vast and wild North Woods Through Nason's eyes, we see the hardships endured by Arnold's men, their bravery, and Arnold's own noble character in the when he was still the most brilliant and trusted of George Washington's officers.
Rich in historical detail, filled with the bold romance of the Revolutionary period, Arundel is now in print for the first time in paperback. It is both a moving story of a boy's passage to manhood and a fascinating chronicle of the native people and fantastic natural abundance of the northern wilderness.

Kenneth Roberts was the author of many best-selling novels, including Northwest Passage, Lydia Bailey, Oliver Wiswell, Rabble in Arms and his famed first novel, Arundel. Renowned for his scrupulous accuracy and unforgettable depictions of past times, he was awarded a special Pulitzer Prize citation in 1957.

Nason is the family name of the old farm where our cottage is located too! They owned most of the land around the lake at one time.

This book is 866 pages! A really long book for me!

The historical novel usually concerns itself with persons who have made a major imprint on their times and on the minds of posterity; with generals and statesmen and kings and queens. But for every king there were subjects. An historical novel may as justly deal with the lives of people who were important not individually but in the mass.
The attempt in this book has been to tell the story of the founding of a small Maine town, by ordinary people, in what was then an ordinary way. It was the way in which towns were founded from the Atlantic seaboard west to the great plains, by stripping off the forest and putting the land to work. The people in this book were not individually as important as George Washington; the town they founded was not as important as New York. But people like them made this country, and towns like this one were and are the soil in which this country's roots are grounded.
This is an historical novel in the sense that most of the major incidents here related actually happened, and that every person named in this book actually lived and wore the name he here wears.

It looks so good! It's about the settling of Union, Maine.

The other books I got are:
2 Agatha Christie's Towards Zero and Passenger to Frankfurt
The Road Dance by John MacKay  (a Scottish writer and set in Scotland!)
The Dive From Clausen's Pier by Ann Packer
Away by Jane Urquhart
Ahab's Wife by Sena Jeter Naslund
Free Land by Rose Wilder Lane  (I had bought this one out in South Dakota years ago and then loaned it to a friend before I read it and never got it back)
and The Chimney Sweeper's Boy by Barbara Vine (aka Ruth Rendell)

Another thing we look forward to in Maine each year is Moxie. It's a soft drink made and sold in Maine. Some people say it is medicinal tasting, but we all love it. We made Moxie floats several nights! And loaded up on it to bring home... 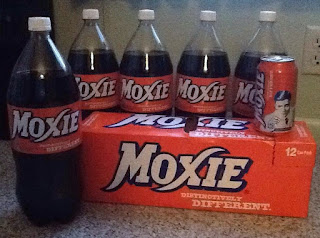 Scotland has Irn Bru and we have Moxie! Now if only I could find earring of Moxie bottles like I did of Irn Bru in Scotland! 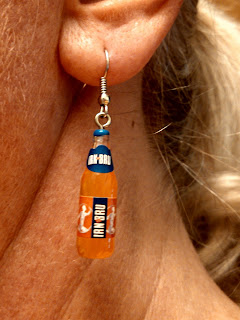 Peggy Ann
Posted by Peggy Arthurs at 12:24 AM