One of the highlights for me was seeing Robert the Bruce's grave-site. He is buried in the Abbey Church in Dunfermline.  Still in use today the Abbey is one part medieval church and a newer portion added in the 1800's.

Bruce was buried in Dunfermline Abbey in 1329 and as the centuries passed, the exact spot became obscure. In 1818, when the ground was being cleared for the building of the new Abbey Church, they came across a vault which contained the King's remains.  Within the vault was an oak coffin covered with two sheets of lead. Inside the coffin lay a skeleton wrapped in a shroud of cloth of gold. On a second official inspection the following year it was found that the breastbone had been severed in order that the heart might be removed in compliance with the King's expressed wish that it should be taken to the Holy Land.

In 1819 amid a great upsurge of Scottish national feeling, his remains were ceremoniously re-interred in the newer portion. In 1889 it was covered by a magnificent rectangular memorial brass in medieval form and embedded in a slab of marble. The Latin inscription on the brass is translated: 'The tomb of Robert the Bruce, King of Scots, fortunately discovered among the ruins in 1818, has been anew marked by this brass in the 560th year after his death'.

His embalmed heart is said to be buried at Melrose Abbey. 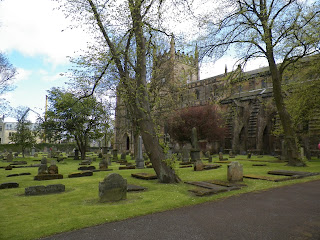 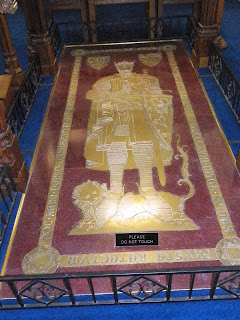 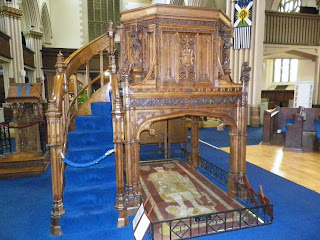 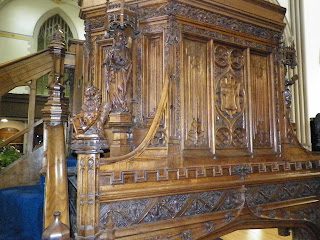 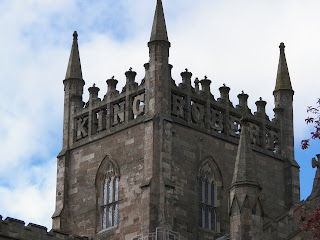 The tower spells out on all four sides
King Robert the Bruce.