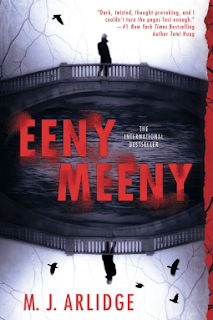 
About this author
:
M.J. Arlidge has worked in television for the last 15 years, specializing in high end drama production. Arlidge has produced a number of prime-time crime serials for ITV In the last five years, and is currently working on a major adaptation of The Last of the Mohicans for the BBC.

Two people are abducted, imprisoned, and left with a gun. As hunger and thirst set in, only one walks away alive.

It’s a game more twisted than any Detective Inspector Helen Grace has ever seen. If she hadn’t spoken with the shattered survivors herself, she almost wouldn’t believe them.

Helen is familiar with the dark sides of human nature, including her own, but this case—with its seemingly random victims—has her baffled. But as more people go missing, nothing will be more terrifying than when it all starts making sense....

A solid thriller, set in England,that keeps you engaged and turning the pages. Slick serial killer, interesting mode of murder and a twist at the end that I wasn't expecting. Good camaraderie between detectives. Well defined characters although the main character Helen Grace was a little cold and detached for my liking.  Glimpses of her character warming though and coming to terms slowly with her past. Not sure if enough to make me want to read more about her though. There are 2 more books in this series.

Purchase this book:
Amazon US