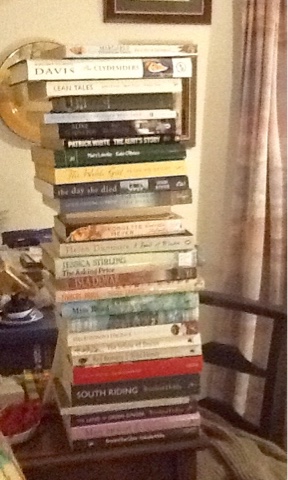 Too many books! I know, how is that a dilemma? Getting them from Scotland to home in the U.S. We've spent the morning packing, weighing and measuring boxes, two of them. Then we called Mailboxes, etc. and went into the post office to inquire about economy shipping. Looks like it is going to cost approximately £90-£99 to ship. Convert that to American dollars and it will be approximately 150!

So we spent the afternoon packing my carry on and my one free checked bag to see if we could get the books and souvenirs all in those and still be able to lift the carry on into the overhead and meet the 50 lb. limit for the checked bag. Sadly the checked bag is around 8 lbs. over. And there's still a few clothes that will need to be added. Looks like I am going to have add a second checked bag. I can pick up a med. size bag for £15 and then the charge for checking the second bag will be $100. A little cheaper, but not much. But I will be able to add the books back I had decided to leave here and some pottery Katrina wanted to send home with me.

Since my second bag can be up to 50 lbs. and I was let's say 10 lbs. over, I told Katrina lets hit some more charity shops! NOT!

From Katrina:
Jane's Parlour and Penny Plain by O. Douglas
House Bound by Winifred Peck (Persephone)
The Far Cry by Emma Smith (Persephone)
Three by Winifred Holtby, South Riding, The Land of Ginger and Anderby Wold
Two by Margaret Thomson Davis, The Clydesiders, The Kelly's of Kelvingrove
A cartoon book The Broons

from James Oswald:
Natural Causes
A Prayer for the Dead
Dreamwalker
The Rose Cord
The Goldn Cage

from Alan Jones:
First print copies of The Cabinetmaker &
Bluewicked

Mary Stewart:
Thunder on the Right
Wildfire at Midnight

Miss Read Books:
The Howard's of Coaxley
Trilogy- The Chronicles of Fairacres
Changes in Fairacres

Betsy Whyte:
The Yellow on the Broom
Red Rowans and Wild Honey. (Memoirs of growing up a Traveller)

The Third Policeman by Flann O'Brien

The Aunts Story by Peter White (a black Penquin)

A Spell of Winter by Helen Dunsmore

The Flying Inn by G.K. Chesterton

A Splash of Red by Antonia Fraser

The Matchmaker by Stella Gibbons

Assorted Scottish authors:
The Gowk Storm by Nancy Brysson Morrison
It Could Happen to You by Isla Dewar
The Asking Price by Jessica Stirling
The Rival Monster by Compton MacKenzie
The Piper in the Wind by Anne Hepple
Another Dash O' Doric by Norman Harper
Tinkers Pride by Nigel Tranter
The Speak of the Mearns by Lewis Grassic Gibbons
Past Praying For by Aline Templeton
The Day She Died by Cateiona McPherson

Three and a half days until I fly home. Leaving Tuesday at noon. I'll be glad to be home and see the Bossman and get back to my routine, but I will hate to leave Katrina and Jack. It will be such a long time until I can see them again. I do plan on coming back though!