Alan Jones Stops Over with a New Book Review! 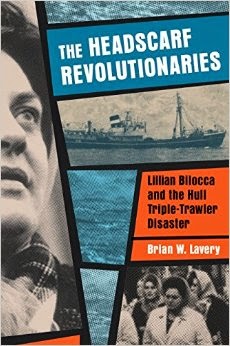 I don't read as much non-fiction as I probably should, but when I heard about The Headscarf Revolutionaries, I just had to take a look at it. I contacted the publisher, and received an advance copy to review; the book is due for release on the 11th June 2015.

I was not disappointed. I read it cover to cover in almost one sitting despite it being written in a very matter-of-fact style, and having an almost old-fashioned tone. This suits the story and makes it all the more raw and moving. The book is incredibly well researched, and it comes as no surprise to find out that this was written during the author's academic involvement with the University of Hull. There are no over-embellishments or sensationalism of events and the story is told very much as it happened.

There are two closely interconnected narratives: the sinking of three Hull trawlers in the horrific conditions of the North Atlantic within three weeks in early 1968, with the loss of 58 men, and the call to arms of a group of Hull womenfolk, led by the force of nature that was fishwife Lilian Bilocca.

Her almost visceral reaction to the plight of the Arctic Trawlermen, often sent out with ill equipped and unsuitable boats, and with under-trained crews in many cases, is the main thrust of the book. How she mobilised an army of ordinary Hull women, all with kinsfolk on the trawlers, raising more awareness of the serious safety issues in a few weeks than the unions had achieved in many years of campaigning, is remarkable, as is her sense of purpose when not all of the fishing community approves of her actions.

There are a few appearances in the book of a young John Prescott, a quayside union firebrand in those days, and he writes the foreword, with a warmth and personal admiration for 'Big Lil', as the unlikely leader of the fishwives was known.

The book isn't one sided, and doesn't shy away from the negative side of the campaign, and there's some sense of irony by the end as the Icelandic Cod War and fishing quotas change the Humber fishing fleet forever. It contains a photograph section which is useful, giving the reader an insight into the trawlers, the people involved and a flavour of the time and place the book is set in.

It wouldn’t be surprised if this book is made in to a film, like 'Made in Dagenham'. It has all the elements of a human story with a social message and larger than life characters. Think 'Brassed Off', but a true story!

I thoroughly enjoyed The Headscarf Revolutionaries; for me it was utterly compelling and a 'must read'. I wouldn't hesitate to recommend it to anyone who loves a great story with a social conscience. I gave it 5 stars.

Thanks Alan! I'm excited to read this too! It's available to order for the US through The Book Depository with free shipping. Looks like it's available May 19th there. It's available on Amazon UK June 11th.

If your interested in learning about the British Icelandic Cod War here's a great video by the BBC about it.
Posted by Peggy Arthurs at 12:00 AM