As always I'm a day late and a dollar short when it comes to reviewing books, this one was published in 2010 and I just found it. I would venture to say this will be my FAVORITE book of the year!

I 'read' the audio version read by Bronson Pinchot. He's the actor who played Balki Bartokomous in the TV series Perfect Strangers. Remember that show and the silly character of Balki and his funny voice? I never in my wildest dreams would have guessed this narrator was one and the same! Excellent job, he was Wyatt Hillyer. 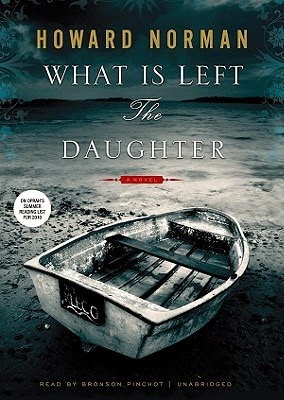 Set in Nova Scotia during WWII, this is a story about a love triangle involving a German student and narrated by the main character, Wyatt. He is writing a letter to his daughter, Marlais, whom he hasn't seen since she was very small. He had read or heard the phrase 'What is left the daughter' and it started him thinking about what would be left his daughter. He wanted her to have the details and truth of his life as he had nothing else to give her.

He begins the letter in 1941, the day both his parents jumped to their deaths from different bridges in Halifax within minutes of each other. Wyatt was 17. He goes to live with his aunt and uncle in Middle Economy, a small town in Nova Scotia. Here he becomes an apprentice sled/toboggan maker to his uncle and falls madly in love with his adopted cousin Tilda.

Being set during WWII and involves the sinking of a Canadian passenger ferry, Caribou, by German U boats, (an actual event) this story is both tragic and comedic at the same time. It's a look at the fear and folly of judging people by association. Of how war and tragedy can make a human capable of things he might otherwise never consider doing. How a split second decision changes lives. The wonderfully quirky characters, sharp dialogue and wit bring a lightness to this tragic tale.

I loved the quirky details brought to this story,
Was there anything I didn't like about this book? Not a thing!

'Reading' this on audio was like sitting and listening to Wyatt read his letter to me. I loved it. This was my first book by Howard Norman and I think he will become one of my favorite authors. Sadly I had one of his books, The Museum Guard, on my shelf for several years and never read it. It made it through several clearing off of the shelves and last time got sent to the library book sale unread! Pooh! I've ordered The Bird Artist by Norman from Paperbackswap and can't wait to read it!

You can read an excerpt here.

Have you read What is Left the Daughter? Or any other book by Norman? What did you think?
Posted by Peggy Arthurs at 11:33 AM