The Sound of Insects by Mildred Davis 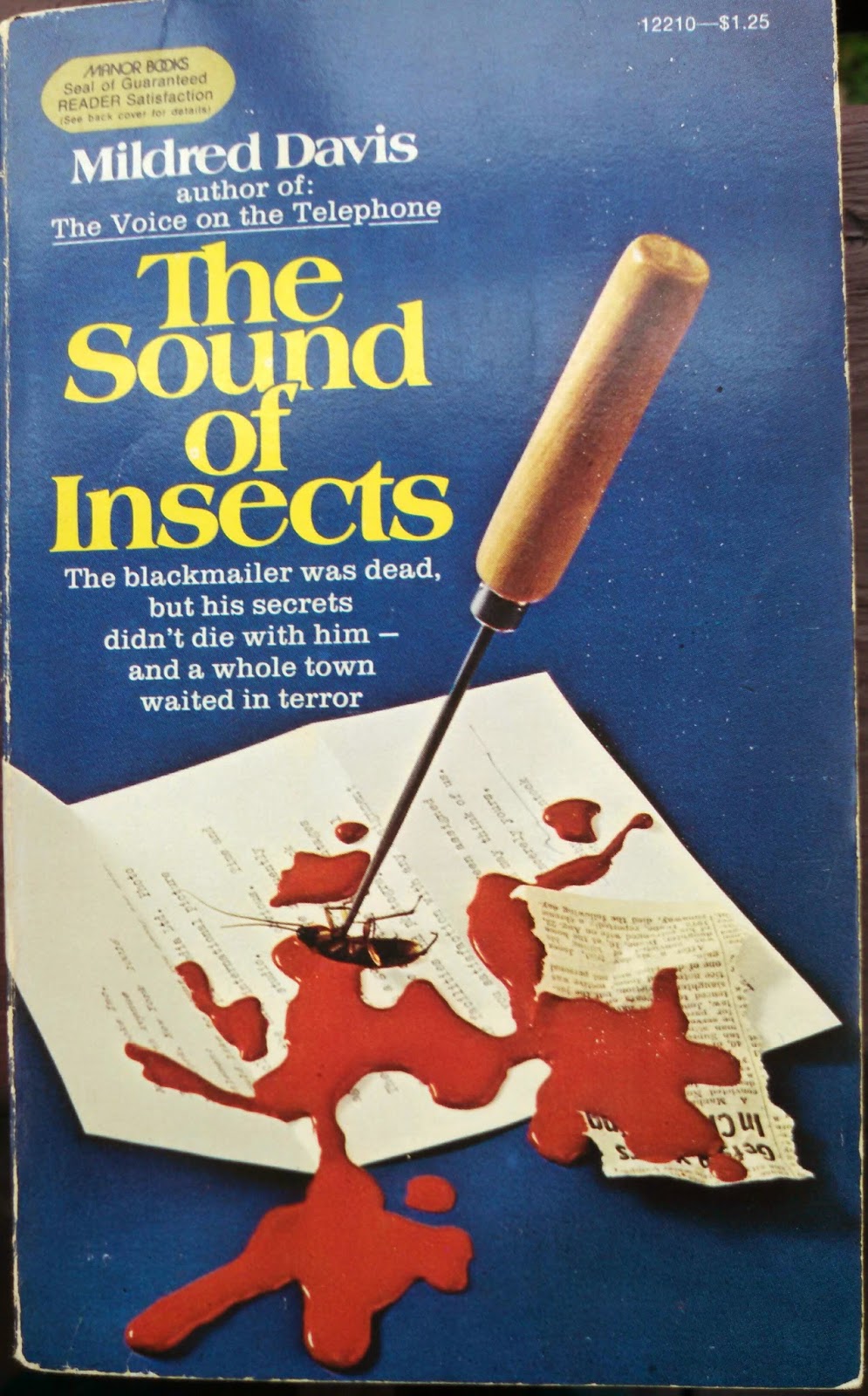 Like insects scrambling for safety...
the victims of blackmailer Johnny MacLeod trampled on anyone who got in their way as they tried to hide their guilty secrets.
Someone had stabbed Johnny with an ice pick. But the town's secrets did not die with him. They only came closer to the surface. Now it was necessary to find a victim to take  the blame and stop the gossip that threatened to destroy the whole town.

I read this book for Crime Fiction of the Year over @Past Offences. This month's year is 1967. I enjoy doing this meme! Each month we have to read a book published in the year chosen by Rich or a fellow reader. Click on the link 1967 to go to the page and see what everyone read or sign up yourself!

This was another excellent book by Mildred Davis. She does suspense well! Johnny seems to be blackmailing everyone in town. Finally he meets his match and someone puts an ice pick through his heart. They should have felt safe now but then the whispering phone calls started! His mother is acting strange and snooping around, determined to find the killer. Making all kinds of innuendos. Pitting one neighbor against the other. Is she the one making the calls?

A good study in human behavior. Davis sets up the community dynamics well in the opening chapters. Seems like a tight community, with long standing friendships, until Johnny is killed. Now protecting their secrets are at the top of the list and they become like insects ready to devour each other. A kidnapping, a suicide and a confession lead to the climactic ending.

quote:
Newer leaves, patched red and yellow as though by a colorful disease, covered the infinite layers beneath. Jelly Bean ran ahead, stopping now and then to cock his head. He heard a brittle crackle far off in the still air and took off like a shot. She tried to whistle him back but her only answer was a distant thrashing.
A cluster of black-eyed Susans were still growing in a sheltered copse and she bent to pick them for the cache pot in her room. Then she followed the sounds of thrashing and found Jelly Bean digging furiously at a not-yet frozen patch of ground. Uneasy, she whistled again, but he paid no attention.
She went over to pull him away and saw what he had - a thin gold ring with an old fashioned setting that held an opal.
The flowers slipped from her nerveless fingers, joining the dead things on the floor of the woods. A wind whistled past the witch hazel trees, making her shiver. Finally she pushed Jelly Bean away and dug quickly, bringing up the rest of it - a gold charm bracelet, earrings with tiny diamonds and sapphires, a string of small pearls.
She looked around as though expecting the woods to be filled with prying eyes. Everything was deserted. She carried the jewelry in both fists since she had no pockets and walked back to the house. At the edge of the lawn she stopped to make sure no one was watching. Then she ran to the French doors...

Email ThisBlogThis!Share to TwitterShare to FacebookShare to Pinterest
Labels: Book Report, Crime Fiction of the Year