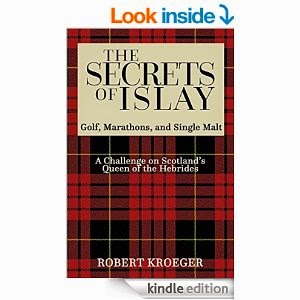 'The story begins with seven people enjoying a single malt tasting in a distillery on Islay, a small Gaelic-speaking community in Scotland's Inner Hebrides. Their challenge is to solve the puzzle, "quid est veritas." One of the group, Caballo Blanco, a re-invented version of the original, has an idea that might unearth answers: to stage a golf tournament and marathon on the island. The golf and marathon are successful but do the seven find the answers?'

I received a note from the author, Robert Kroeger, about his new book being offered free on Amazon Kindle January 5-9th (regularly $9.99). I thought maybe someone who likes golf and whisky would like to read it for the Read Scotland 2015 challenge!

Also this one sounds really good too. Only available free today, January 5th, though.

The Molly Maguires and the Detectives by Allan Pinkerton

Allan Pinkerton, founder of the first modern American detective agency, published gripping mystery novels based on his organization's case files.
Here, Pinkerton sends an agent undercover among unionizing coal miners in a battle against a radical secret society that will change the face of American labor forever.

This event happened here in the state I live in, Pennsylvania. The prison where the Molly Maguiries were executed is now a museum.

Some interesting sites on the Molly Maguires
The Old Jail Museum
The Molly Maguires: The Life of a Tragic History
A tour of the Jail on Youtube including the infamous handprint!

Posted by Peggy Arthurs at 7:32 AM