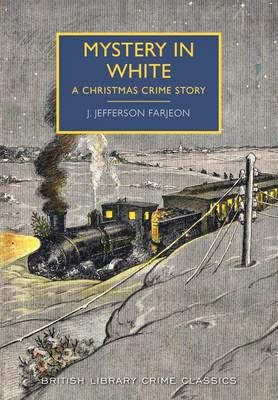 The British Library Crime Classics reprints have beautiful covers and I really love this one. It makes me want to get a mug of hot cocoa and curl up in a big chair with it. Doesn't it you? The original book was published in 1937.

This book has a foreword by Martin Edwards, author of the Harry Devlin and Lake District series. He does a wonderful job and makes you want to dig right in!

back cover:
'The horror on the train, great though it may turn out to be, will not compare with the horror that exists here, in this house.'

On Christmas Eve, heavy snowfall brings a train to a halt near the village of Hemmersby. Several passengers take shelter in a deserted country house, where the fire has been lit and the table laid for tea - but no one is at home.
Trapped together for Christmas, the passengers are seeking to unravel the secrets of the empty house when a murderer strikes in their midst.

The whole story takes place on Christmas Eve and Christmas Day. The main characters are five passengers from the snowbound train. A mild, nervous male clerk on his way to his aunt's for Christmas, a chorus girl, an elderly bore (with an eye for the chorus girl), a brother and sister team, and an elderly man who is a paranormal investigator. Another man, Smith, shows up. Was he on the train too? Why is he so secretive and hot tempered? Why is the tea laid, fires burning and no one there? Why is a knife laying on the kitchen floor?

This was a great read! Murder, mystery, a hint of romance, a blizzard, a deserted manor house and humor. A must read for a cold winter day. Reviews at The Passing Tramp and Past Offences made me HAVE to get this book. Thanks guys! I want to read more of Farjeon for sure! And it looks like there is plenty...