It's true! Last week we met with a fellow who contacted us via Facebook looking for relatives of Joseph and Mary Arthurs. Turns out they are my husband's great grandparents and Jeff is his second cousin! Dave knew little really about his dad's family other than they came from Ireland. And they did, his great grandpa Joseph Arthurs came over in the late 1800's. They were Catholic and fleeing the persecution of the Orangemen.

Turns out his great grandma, Mary Hunter Arthurs is descendant of a long Scottish line and Jeff had the documents to prove it. All the way back to his 27th great grandfather, Simon fitz Alan in the 1100's! Simon fitz Alan was a 12th-century noble who was the ancestor of the Clan Boyd. Simon was the third son of the Breton knight, Alan fitz Flaad, feudal lord of Oswestry, by his spouse Aveline, daughter of Ernoulf de Hesdin. Joseph Hunter was the first in the line to immigrate to America. He was born in Ayrshire in 1747 and died in New Jersey in 1858.

Sir Robert Boyd was said to have fought with William Wallace and Robert the Bruce! Somewhere in there a Campbell was married in also. James of Abbotshill & Park Hunter is a name on the list and I haven't had time to look around about him yet but it looks like he might link into Lewis or Meriweather from our nations history! Jeff is going to send me a copy of the Scottish line in order. It's been fun looking up these people and learning about them. I'll let you know if I find anything interesting out!

On another note...
I picked up a book on the library book sale cart by Shirley Jackson. She wrote horror, her most famous The Haunting of Hill House. I've seen the movie but not read the book. This book, Life Among the Savages, is a memoir of her family's life in rural Vermont. On the back of the book...

One of America's most celebrated writers takes you home to a family and a small town so funny and unpredictable, you'll wish it were your own!
Looking forward to reading it!

We are off to the kid's house in Maryland this morning for a pre-Christmas celebration. Dave has to work on Christmas. I've loaded the iPad with audio books for the drive. It's only 4 hours each way but I can get a book read in that time! Not sure what I'll read, In the Shadow of a Glacier by Vicki Delaney or The Kitchen House by Kathleen Grissom or Death at Wentwater by Carola Dunn. 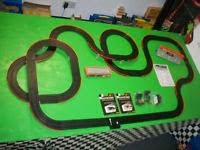 Can't wait to see the grandkids open their gifts! Got Ian a slot car racetrack. And Isa is getting the retired American Doll she wanted. We've told her over and over its just to expensive so she will be so surprised!

Well I better go get moving so we can get on the road. Bitter cold but at least there isn't any snow on the ground! Just a light dusting last night. See you next week!

Posted by Peggy Arthurs at 8:59 AM