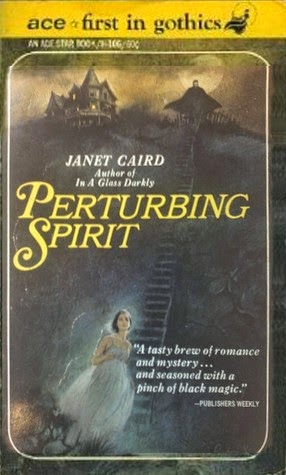 Don't you love this cover?! Sadly though as I was reading, it slowly fell apart in my hands:( The paper is very yellow and brittle. So sad the death of a book.

Anthony Boucher said:
'It's kind of hard to describe just what kind of novel this is. It's about a minor Scots Border festival, genteel and harmless and artsy-craftsy, which is taken over by an extraordinary folklore specialist with profound scholarship, a superb sense of theatre and just possibly some genuine liturgico-magical skills. This makes for a story completely sui generis: charming, witty, satiric, and disturbingly eerie.'

I enjoyed this one too, not as much as Murder Scholastic as there was no 'murder' to solve in this one, but there was the mystery of just who or what Sinbad Mazeron is. I'm really not up on the magic or med-evil stuff so I got the jest of it at the end but still kind of felt a little left out on that score. BUT, I did love the characters, the light romance, the setting and the atmosphere. The atmosphere was very well communicated. Good build of suspense to keep me reading and I liked the cat, Gadarene too!

Sinbad was a great character, the absolute essence of evil and yet so alluring and intoxicating. So devilish...

'He must be made to remove his glasses-if only he, Sinbad Mazeron, could take the part of Merlin-it was his due, from any angle- but no, that would obviously be too much against local tradition, unless it could be subtly- it would have to be very subtly-contrived? He must work through others-and there was a deep and secret pleasure in the manipulation, so that while they thought they were doing one thing, he knew they were doing something far other...'

'Then Sinbad turned from speaking to John. There was a snarl, and Gadarene, paws flattened, claws out to the limit, tail flying, had flung himself straight at Sinbad. Isabel, remembering past incidents, cried out. But Sinbad, swift as the furious animal himself, raised a hand, in an outward thrusting gesture, said something which no one caught, and Gadarene fell in mid-leap, and raced from the room, streaking between Cathrine and Miss Ehrenburg as they entered.'

Lovely place descriptions...
'There was a track, in places not more than a sheep track, that led through the Devil's Cauldron, up to a high lost valley, full of moss-hags and peaty burns, and over the shoulders of scree-blotched hills, and into forsaken gullies and corries. Even the hardiest of hikers seldom went there- there was no beauty in it, only a sense of barren waste, and even on a sunlit day, a bleakness.'

Sinbad was bringing to the Fauldston Festival the rites of Thammuz...
'Tom Blake of the Scots Herald was looking after Sinbad Mazeron thoughtfully, 'Thammuz was a god of ancient- very ancient- Syria. And his worship involved ritual suicde and other rites which I should be very surprised to see enacted in a Scottish Border town...this, John, is going to be a much more interesting assignment than I had thought.'

Will Sinbad succeed? You'll never know if you don't read the book!