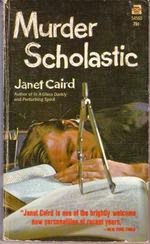 Back cover:
Murder was not included in the curriculum of Findlater's Academy, but somewhere in the school's dim, shadowed halls a vicious killer lurked...

When Christina Graham found the body of her colleague, Joseph Walsh, an antique compass buried in his back, the faculty privately agreed that a lot of people might want the meddling old math teacher dead - and that included David Ronaldson, who appeared mysteriously out of the rain on the night of the murder. The school now needed a math teacher in a hurry, and luckily David was qualified. A fortuitous coincidence...or was it?

Who was David, really? And where did he come from?

Despite her doubts about the new man, Christina found herself attracted to him, flattered, yet frightened by his ever-present attention. And then, suddenly, the killer was stalking Christina, and the small seed of doubt about David began to grow into a monstrous, evil flower..

...Until the murderer made one last, desperate move...

Very enjoyable read! Great plotting, great characters and relationships. Plenty of red herrings to keep you on your toes. I did 'think' it was who it ended up being, but had no idea why so thought I was off. There were just too many other people that could have done it! Nice climactic ending and little romance thrown in for flavor.

Ms. Caird is a Scottish writer and the book is set in Scotland. She was born in Malawi, but was from Dollar, Stirlingshire, Scotland and was educated at the University of Edinburgh. She was married to James Caird, a school inspector and had 2 daughters. She wrote one other mystery, her first book, A Glass Darkly, which I hope to find a copy of soon! Romance suspense is her specialty. If you come across one of her books pick it up, you'll like it!
Posted by Peggy Arthurs at 12:00 AM