The Spider and the Stone 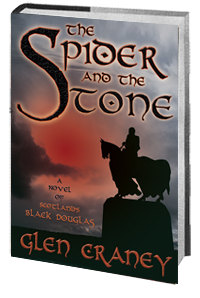 
From the Inside Flap
As the 14th century dawns, Scotland's survival hangs by a spider's thread. While the Scot clans scrap over their empty throne, the brutal Edward Longshanks of England invades the weakened northern kingdom, scheming to annex it to his realm.

But one frail, dark-skinned lad stands in the Plantagenet monarch's path.
The beleaguered Scots cherish and lionize James Douglas as their "Good Sir James." Yet in England, his slashing and elusive raids deep into Yorkshire and Northumbria wreak such havoc and terror that he is branded the Black Douglas with a reward placed on his head for his capture.

As a boy, James falls in love with the ravishing Isabelle MacDuff, whose clan for centuries has inaugurated Scottish monarchs on the hallowed Stone of Destiny. His world is upturned when he befriends Robert Bruce, a bitter enemy of the MacDuffs. Forced to choose between love and clan loyalty, James and Isabelle make fateful decisions that will draw the opposing armies to the bloody field of Bannockburn.

Isabelle will crown a king. James will carry a king's heart. At last, both now take their rightful places with Robert Bruce, Rob Roy, and William Wallace in the pantheon of Scot heroes.

Here is the story of Scotland's War of Independence and the remarkable events that followed the execution of Wallace, whose legend was portrayed in the movie Braveheart. This thrilling epic leads us to the miraculous Stone of Destiny, to the famous Spider in the Cave, to the excommunicated Knights Templar, to the suppressed Culdee Church, and to the unprecedented Declaration of Arbroath, the stirring oath document that inspired the American Declaration of Independence four hundred years later.

The Spider and the Stone is the unforgettable saga of the star-crossed love, religious intrigue, and heroic sacrifice that saved Scotland during its time of greatest peril.

This book was recently brought to my attention and since it fits right in with our Read Scotland Challenge I thought I would share it with you! It looks really good! I know your probably saying 'Yes, but I'll never get it read by the end of the year', BUT Read Scotland will be back for a 2015 edition so go ahead and get it! Stay tuned for a review! Click here for links to buy the book.

Here are a couple links to get your interested in the subject matter!
Sir James 'Black' Douglas (BBC)
For a more in depth write up on him...
Significant Scots: Sir James Douglas
Legend of The Spider in the Cave
and a children's version of the legend
The Stone of Destiny
the film about the return of the stone
Movie trailer
Song by Steve McDonald