Dream of the Dead by M.G. Scarsbrook 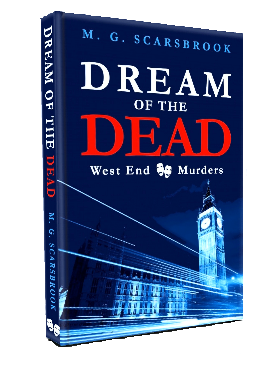 
A rare, corrosive poison has burned through his stomach.


No one knows why.

Enter DI Jack Ravenshaw. A young, talented officer with a secret: he belongs to England’s most famous dynasty of actors. When Scotland Yard uncovers his hidden past, his acting experience, and his formidable connections, he becomes the perfect choice to investigate the producer’s killing. Against his wishes, he must return to London's West End.

Cast back into one of the most vibrant – and violent – areas of the country, Ravenshaw is quickly surrounded by sexy performers, shadowy assistants, and powerful investors. Finding the truth seems almost impossible. Devious suspects lie at every turn. Corrupt officers sabotage his inquiry. Even his mind tricks him with dreams and hallucinations about his past. Yet with the help of his mysterious partner, DS Emily Hart, Ravenshaw must put all his skills into action against an ingenious, twisted, and ruthless killer…
But can he solve the case before another person is murdered?

Clever! Good solid plot with an ending I didn't foresee. Ravenshaw is a somewhat different detective. He was an actor from a long standing acting family. He witnessed his father's murder and the case was never solved. He is haunted by the fact that he was unable to do anything to save his father or bring his killer to justice so he joins the police force. His actor's intuition and ability to read people and actions makes him a very interesting detective. Not to mention he sees ghosts! A little untraditional for a crime tale, but it works well.

His partner, DS Hart, starts off on the wrong foot and I didn't warm up to her right away. But she comes along, ends up being a great DS and partner for Ravenshaw. It slowed down a bit in the middle, but picked back up and ended with a bang. Would I read more in this series? Absolutely! Book 2 is coming out this year. I'm interested in peeking in on how Hart and Ravenshaw's relationship grows. now that she is really on his side!

Sorry Matt, that it took me so long to get to reading this! Thanks, I enjoyed it immensely.

You can get a Paperback edition

or a Kindle book