I picked up an old, 1949 first edition, hardback, of It Was Like This by Anne Goodwin Winslow at a thrift shop recently. I forgot to add it to the list I posted the other day! I had never heard of her, but it looked like it might be similar to O. Douglas' style of writing. A kailyard type story. So I grabbed it. 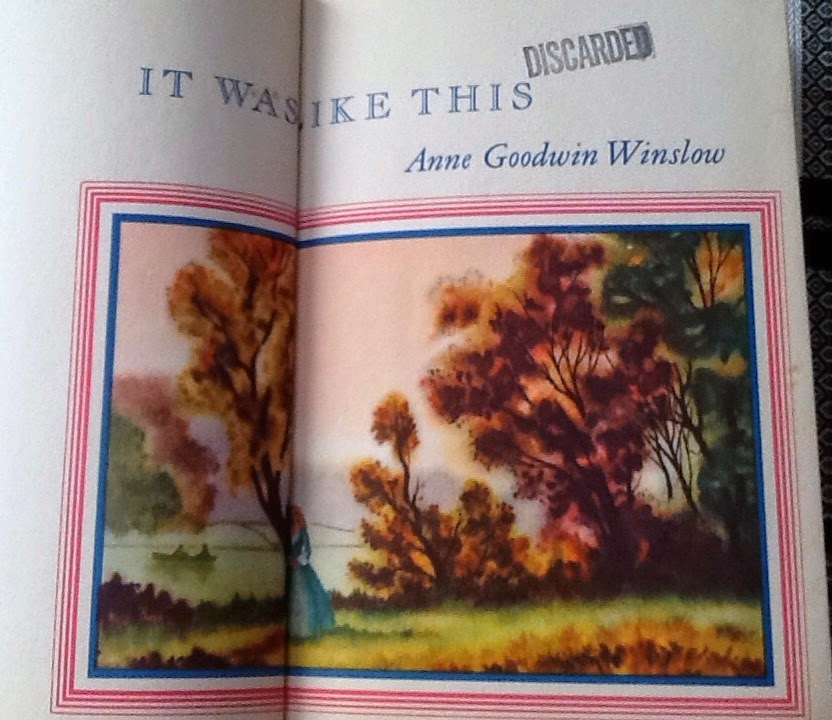 It is an old library book and has stamping on it, but otherwise it's a nice copy. I did a little nosing around about this author and found out she is from Tennessee and didn't start writing until she hit 68! She had a book of poetry published in 1925 at the age of 50, but didn't start writing novels until 68. She wrote 6 books between 1943 and 1949. It Was Like This was her last full novel. She wrote short stories and poetry the last few years of her life. She died at 84 and is buried in Arlington National Cemetery next to her husband.

She had no formal education of any kind. Her father's idea of educating his children was to let them loose in his library and let them read. Anne married Eben Eveleth Winslow, a West Point graduate and captain in the Army Corp of Engineers while still a teenager. He went on to become a general and an expert in coastal fortifications. He retired in 1922 and passed away in 1928. Anne settled into a life as dowager on their estate, her old family home in Memphis and wrote her novels and entertained guests.

A sample of her writing from It Was Like This:
Coming back one afternoon from Pass Christian, where he had gone to mail his morning's work, he had begun to speculate again on the curious relation between monotony and time. It was exactly the opposite of the one commonly supposed to exist; variety, not sameness, was the element that made you conscious of time. Anybody who found it hanging heavy on his hands should just try doing the same thing at the same hour every day and see what happened. Not sleep itself was more oblivious of time than monotony was. This afternoon, for instance: it was about three o'clock now - or would be if he had his watch; three o'clock and all's well. He would find his mother in the bean patch, or some other patch, as usual. Lawrence he would not find at all because as usual he would have ridden off somewhere; and Anna had said as usual that she was going over to see about her dam. Wasn't that her horse, though, there by the gate? Hadn't she gone after all? He quickened his steps; he was near enough now to see that it was indeed Mazeppa; he had Ann's side-saddle on, but no bridle, and was standing outside the gate waiting for somebody to let him in; which was so far from being usual that instead of walking Hugh began to run.

Find her books at Alibris  or Amazon or Abe Books