Book description:
Liv and Autis Oakley, a young professional couple, have purchased their dream home on several wooded acres of Wadmalaw Island—one of the Sea Islands bordering Charleston, South Carolina. In short order they find slave graves from the Civil War–era on their land. Soon after, they realize that there are ghostly spirits in their furnished basement, and a demon appears in the form of a large black panther, which rages and ravages. Finally, they see the wraith-like lady who lives in the run-down old mansion back in the woods behind Liv’s and Autis’ dream home. All of these sinister elements are intertwined in Liv’s family history: a history of which she was totally unaware. Liv’s role in this family history is the catalyst activating the spirit elements on the property. Liv and Autis discover that finding their dream home was no accident.

Liv and Autis—with the assistance of their large pointer, Bob, new-found friends, Carole “Bambi” Bamberg, a vivacious blonde Southerner, and Sweetgrass Weaver, 90-year-old descendent of slaves—struggle to defeat the forces making their lovely home into a living prison.

I picked this book up at Grandfather Country Store in Blowing Rock North Carolina. A wonderful quaint little store full of well everything! Mr. Bare was sitting there in a chair chatting with my husband about college basketball when I wondered up to the table with his books on it and realized he was the author. He also owns the store! A charming man, I thoroughly enjoyed talking to and probably would have spent a lot more time talking to if hubby hadn't went out and waited in the car for me:)

Meet Bart Bare (he let me take his pic!) 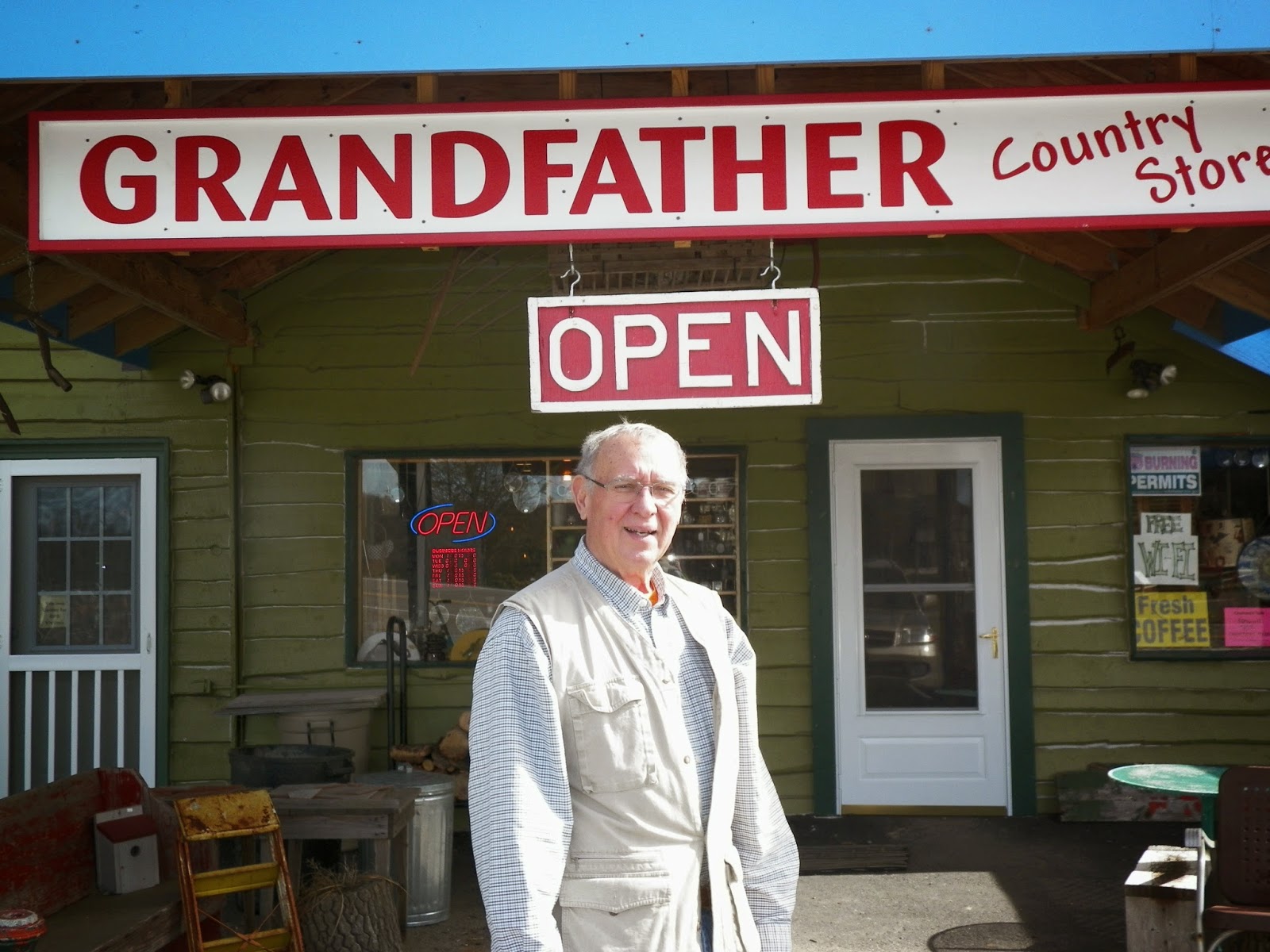 Mr. Bare was born in the mid-west. His mother was a first generation Italian and his father a son of Appalachian German ancestors who came to America in the 1700's. His mom's second marriage took Bart to Florida where he finished High School and attended a number of colleges in the south. He completed degrees in psychology from the University of South Florida, and Appalachian State University in Boone, NC.  Mr. Bare had many different types of life experiences before completing his college degree. He worked as a shrimper, salesman, bulldozer operator, landscaper, and in community organization. He also served three years as a paratrooper in North Carolina, and in Germany. After 27 years as a college educator he retired and took on a whole new life: new community, new profession. Writing is his second life work.

Bart has published 3 books with the fourth book coming out any day now. He doesn't fit into any one genre though, each book totally different from the first.

You can read the first chapter of this at his website!
Girl: A Novel

and the new one is titled S.S. Jew but is not yet available although I saw a copy when I was visiting with Bart! It's about a concentration camp prisoner who looks so much like a German prison guard that he kills the guard and steals his identity and life. Quite a different take!

So, on to my thoughts on Wadmalaw... This book is set on an island off the coast of Charleston S.C. Both of my boys were born in Charleston so the setting is very familiar to me and the history and culture of this area of the south. Bart nailed it. Wonderful southern flavor, great characters, southern drawl, sweet tea and southern oaks with moss hanging from them. You can really visualize it.

In the telling of the story we move back and forth between now and during the Civil War to learn the history of the house and the family. I loved that! When reading a section about the original owners back in the Civil War time, there is some hateful behavior and hateful names and words that are offensive, but it reminds you what a horrible time in our history it was. Then we move back into present day and see how the characters are heartbroken over the outrageous behavior of their ancestors. There is a good balance.

quote: 'Remember my ancestors were forcibly brought here as slaves and made to forget their past while they were made to live in ways that weren't even suitable to livestock in a decent society. some may tire of hearing that message; some may over-burden themselves and other with that message, but the message cannot be allowed to disappear. Much like the message of the Jew Holocaust in Europe - it must stay in our awareness. The reason for that doesn't need to be said because what took place in that horrible time speaks for itself.'

There is some sexual content in this book. Ghostly and earthly. The sex wasn't over-done, but the crude banter of a sexual nature between characters was a little much in my opinion and could have been left out entirely as far as I was concerned. It detracted from a great story. Unless he was trying to highlight the change in the Bambi character as the story progressed.

Other than that it was an engaging, well written, story that kept me turning the pages.

Wadmalaw is a real island and there is a real Tea Plantation on it! Bigelow Teas actually bought it and renovated it and opened it for tours. it is the last remaining tea plantation in America. That's on my bucket list of things to see! There is also a recipe for Russian Tea in the book, and not the one using powdered tea and Tang!

Peggy Ann
Posted by Peggy Arthurs at 11:38 AM