We are in the Blue Ridge Mountains in North Carolina this week. This winter that doesn't want to let go is putting a crimp in our plans! Cold and foggy. I love fog, but I like my fog with soothing sounds of the buoys and fog horns and waves lapping on the rocks. Certainly not with very winding narrow mountain roads!

Monday we didn't venture out at all as there was ice too. We lit the gas fireplace and played Scrabble, I won!, and read. Yesterday we went and did a little shopping. We hit the historic Mast General Store (will do a post on that when I get home!) and a couple thrift/charity shops. Had a divine steak dinner and finished up the evening in front of the fireplace playing Acey Deucy and again I won! I finished reading The Removers and am almost done with a fun vintage mystery Evidence of Things Unseen by Elizabeth Daly.

Today we went to Linville Falls even though it was still foggy. just added atmosphere:)  check it out... 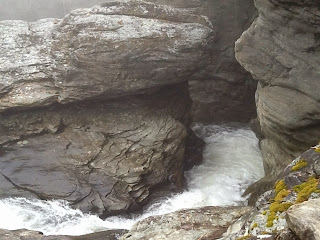 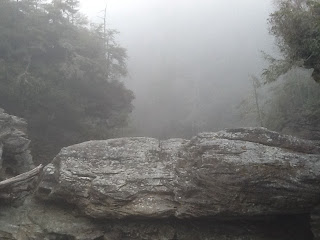 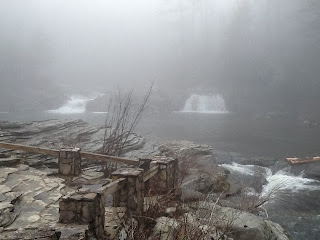 Found some good books at the thrift stores:

And my favorite find, this bright green sweater with little black Scotty dogs on it! The pic doesn't do it justice. 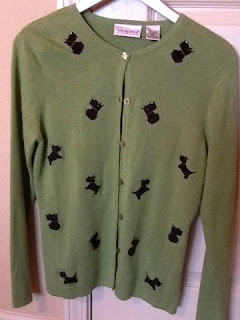 Fog started clearing out this afternoon and the temps are going up. Suppose to be nice now, up to 61 for Friday! So we are going to do a little hiking and picnic on Grandfather Mt.  Could be worse I guess, could be tumbleweeds instead of fog! Check it out - a town in New Mexico was taken over by them this week. They are digging out of them!

Posted by Peggy Arthurs at 7:50 PM