There is a new Scottish writer of Tartan Noir in town! His name is Alan Jones and his book is... 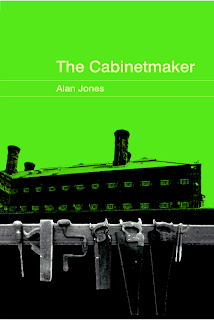 'The Cabinetmaker, Alan Jones’ first novel, tells of one man’s fight for justice when the law fails him. Set in Glasgow from the late nineteen-seventies through to the current day, a cabinetmaker's only son is brutally murdered by a gang of thugs, who walk free after a bungled prosecution.

It’s young Glasgow detective John McDaid’s first murder case. He forms an unlikely friendship with the cabinetmaker, united by a determination to see the killers punished, their passion for amateur football, and by John’s introduction to a lifelong obsession with fine furniture.

This is the story of their friendship, the cabinetmaker’s quest for justice, and the detective’s search for the truth.

This unusual crime thriller contains some Glasgow slang and a moderate amount of strong language.'

Alan is a full-time agricultural worker and writes in his spare time. He's also very ingenious! Check out his book promotion here on STV Dundee!

The books website, The Cabinetmaker, has 4 chapters for you to sample, a glossary of cabinet making terms used in the book, a 'slang' dictionary and a map of the area the book is set in. Very informative site. Stop over and see for yourself!

I have not read the book yet, but have read the sample chapters. I just purchased the book, only available in Kindle at the moment, and am looking forward to reading it for our Read Scotland 2014! The language is rough, but it does seem authentic and you really can feel like you are in the detectives environment. I connected that quickly with the characters and want to read more. Alan assures me the language evens out through the mid section of the book and is only there for authenticity. He's working a second book.

Links to the book...
Amazon US

Peggy Ann
Posted by Peggy Arthurs at 11:45 AM