The Very Dead of Winter by Mary Hocking 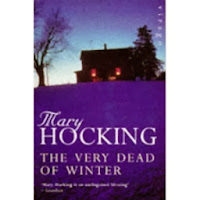 'In this haunting novel, echoing mystery play and fairy tale, a family is forced to confront the grievances and emotional confusions of their shared past. In the very dead of winter they assemble at a remote country cottage enveloped by snow. Ostensibly they are celebrating Christmas, but festivities are marred by the presence of Konrad, who is dying. Florence, his manipulative wife, views Konrad's imminent death with annoyance; their two grown-up children bear the scars of this imperfect union. At the heart of the novel is Sophia, Florence's unorthodox sister and their host, who seems able to stand aside from family combat, yet guards a secret that has relevance for them all. Here, with characteristic insight and compassion, Mary Hocking unravels different kinds of love and need.'
~summary from the back cover of the Virago edition

This was my first Virago novel and first Mary Hocking. I enjoyed it. I think she did a great job of highlighting all the little nuances of each relationship within the family as well as a neighboring family that plays into the story. I was especially interested in the relationship between Florence and her daughter, Anita. They seemed to have a relationship similar to mine and my mother's. It gave me a little insight into where she might be coming from.

I liked the setting, a cottage in the wood with a terrible blizzard going on. Anita's boyfriend, Terence, gets stranded on his way and ends up in an odd accident. Anita and her mother find a half frozen pony in the wood when Florence is on a blind race to go to mass in a terrible storm and she can't go any further. Anita must make a sacrifice to protect her mom. All the neighbors come for a Christmas Eve party. Nicholas is finding himself attracted to the neighbor girl, but that would mean settling down. He is an explorer of sorts and travels all the time. He hates closed in spaces like the wood. And all the while Konrad is upstairs dying. What is the significance of the painted circus bear on his dresser? Why has his family never seen this before? In this short span of time so many things are happening and so many things are being realized. They will all leave the cottage changed people, for better or worse.